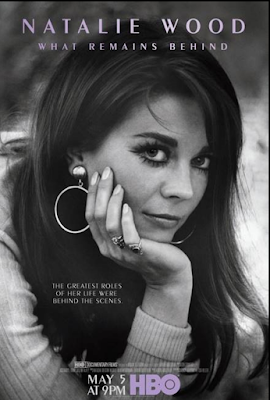 There's a documentary about Natalie Wood on HBO that takes her from her birth to immigrant Russian parents to her death in Catalina. Produced by her daughter, Natasha Gregson-Wagner, it concentrates more on the period preceding her 1981 death, and that's fine with me. It's always bothered me that Natalie Wood is considered more a drowning victim than an actress.

There are many clips from her movies and interviews, but also excerpts of her unpublished autobiography, written for a woman's magazine. Wood seems like a smart, self-aware woman who wanted it all: family and career.

She never chose to be an actress. Her stage mother engineered her early career. But she came to derive satisfaction from it. She learned her craft and was aware of her worth to the producers. In the 60s and 70s, she was remarkable for her willingness to exercise her power and insist on being treated as equal to her male costars.

She chose to be a mother, worked hard at it, and her daughters love and miss her still. I was also touched that her step children -- Josh Donen and Katie Wagner -- felt welcome in Wood's extended family. If there was any tension between Wood and Robert Wagner's former wife (and it would be only natural if there was), she made sure the children never felt the effects.

Her friends and costars are interviewed. Mia Farrow, Mart Crowley, George Segal, Robert Redford and Robert Wagner are among those who share their memories. Next to her daughters, Redford and Wagner were toughest for me. Because they've grown old before my eyes (Redford is 83, Wagner is 90) and Natalie wasn't given that opportunity. She is forever frozen at 43. I miss seeing how a woman with her sensitivity and sensibility approached aging.

In honor of the day 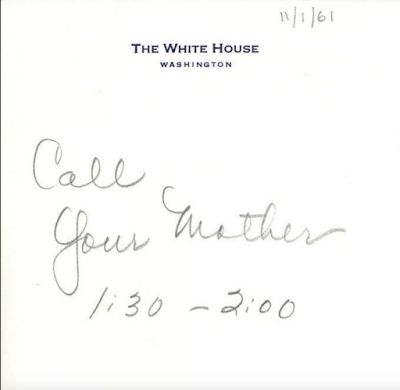 I love this handwritten note from Evelyn Lincoln to her boss.

If you're lucky enough to still have your mom in your life, make like JFK and give her a call.

1. Do you prefer writing with black or blue pen? Blue. Although it's not really a preference. It's just that I have liberated more blue pens than black from the office and Chase Bank. This is not intentional either. I don't recall consciously stealing any of these pens. Blue pens just somehow make their way into my pencil cup.

2. Do you prefer living in the country or the city? City. Though during the shelter-at-home pandemic, I'm not sure it makes any difference.

3. How do you drink your tea or coffee? I don't drink coffee. I prefer my tea hot, and with two sugars.

4. Do you prefer bath or shower? Shower. Unless I'm shaving my legs.

5. Do you prefer reading paper or electronic books? Paper.

6. Would you ever want to be famous? I'd rather be rich. To put a finer point on it, here are the opening credits to a justifiably forgotten movie. I remember watching it as a high school student, doing my homework while babysitting.

8. What is the strangest thing you have ever eaten? Shark vera cruz.

11. Do you prefer swimming in pools or the ocean? Of these choices, pools. Though I like lakes. Fresh water is nice is better than sea salt or chlorine.

13. Where do you feel the safest? Right here at home.

14. What would you like your legacy to be? At this historic time, I want to do right by my faith and by my country. It may sound corny, but I'm doing the patriotic thing and the Christian thing by staying home as much as possible and wearing a mask every time I go out. I'm honored to do right by my country and my community.

A song that makes you sad.  I dearly wish it had worked out. (Play along! Click here for prompts.)