1) TV writer Allan Sherman based this song on his own son's letters of complaint from camp. Did you go away to summer camp? During the school year -- either late fall or early spring -- I went camping overnight with my Girl Scout troop. But it was only Friday night to Sunday afternoon.

2) Our camper is afraid of both bears and alligators. What animal scares you? I am afraid of squirrels. I know this is a silly fear and I bear squirrels no ill will. It's just that when I was a little girl, my dad told me about a kid who was liked to feed squirrels (which he caught me doing) and was bit by a rabid one. Dad went into graphic detail about the -- what was it? 111? -- shots the boy endured, and that has really stayed with me.

3) One of his fellow campers developed poison ivy rash. Have you ever experienced redness and itching caused by poison ivy or poison sumac? Nope.

4) Early in his career, Allan Sherman created the game show I've Got a Secret, which became a big hit. What's your all-time favorite TV game show? A few years ago I became obsessed with the original, 1950s episodes of What's My Line. A cable channel showed them every day as I was getting ready for work. I love the host, John Daly. He was so genial and friendly. 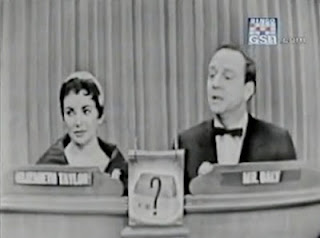 5) In 1959 he moved from New York to Hollywood, where he transitioned from writing to performing almost by accident. As a lark, he entertained at the parties of his next-door neighbor, Harpo Marx. A recording company executive heard him and offered him a contract. Tell us about the last party you attended. Wow. I don't even remember.

6) Allan Sherman got unexpected press attention and a boost in record sales when it was discovered that President John F. Kennedy was a fan. What's something you purchased because of a recommendation from someone else (friend, relative, celebrity endorsement ...)? Nothing comes to mind. I did recently recommend these pimple patches to a coworker.
7) In 1963, the year "Hello Mudduh, Hello Fadduh" was popular, Studebaker stopped producing cars in the United States. What was your family car when you were growing up? We had a Lincoln Continental convertible. My dad loved it. My mom hated it (hard on her hair, and my older sister got earaches).


8) Also in 1963, Vogue magazine did a cover story on how make wearing white "new and exciting." What color do you look best in? Is it the color you wear most often? I look best in green but I most often wear blue.

9) Random question: Have you ever gone on to have a platonic relationship with a former lover? Only once. We dated one summer when my "real" boyfriend had been behaving abominably. I knew in the back of my mind that I'd get back with my "real" boyfriend and, to my everlasting regret, I did. But the nice guy I dated that summer really liked me. He's stayed in touch all these years. I've been invited to the high school graduations of all four (4!) of his children. I still get a Christmas card. I'm very proud of how I handled that breakup. I must have done good.