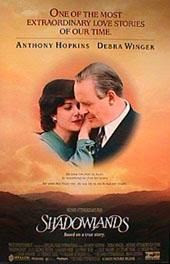 This week's movie topic is all about Books in the Movies...Share on your blog some of your favorite bookish flicks (movies that feature books, reading, librarians, bookstores and the like), linking back here at The Bumbles.

Shadowlands. I loved this movie when it first came out but haven't thought about it in ages. (Shame on me.) An American divorcee, an aspiring writer named Joy (played by Debra Winger) is a huge fan of author CS Lewis. She's enchanted by his ideas and the way his mind works, as represented by the words on the page. She begins a correspondence with him and he (Anthony Hopkins) is equally as impressed by the way she seems to be able to see him so clearly without ever having met him. She flies to Oxford, they meet and then slowly, gently, unexpectedly fall in love. I don't want to be a spoiler, but something major and terribly sad happens that will strike you as cruel. These two waited so long to find one another and then this happens! At one point Joy tells Lewis that we can't enjoy life's happiness without suffering its pain. "That's the deal." That's life. Wise words, but such a hard lesson.

It's a true story, which adds to its poignancy. I also embrace the idea that a sensitive someone can see into our souls by the words we write. Also, their faith was a powerful bond between them. They were both converts to Christianity -- he from atheism and she from Judaism -- and that's an unusual topic for a mainstream film with Oscar-worthy stars.

17. Who would you like to show up at your door to say they love you? Mark Harmon. Of course, he could show up at my office wearing his white and carry me off into the sunset, thereby combining two fantasies. 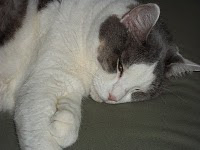 19. How many drugs have you done in the last three days? Crestor for my cholesterol and Allegra D for my allergies.

20. Do you miss film or does digital work for you? Digital is fine, except I keep forgetting to get the photos printed up.

21. Favorite age you have been so far? 35. I felt very sexy and womanly, and I was happy in love. 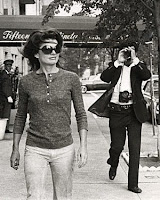 rent desktop picture? Jackie Kennedy Onassis keeping her cool even as pursued by paparazzi. It's there to remind me that when the going gets tough, you've got to just put on your sunglasses and keep going.

24. What was the last thing you said that was funny? I'm such a veritable laugh riot that I can't recall

25. If you had to choose between a million bucks or to be able to fly what would it be? The money. I'm terrified of flying.

26. Who can't you say “no” to? My best friend. When he thinks I'm not acting in my own best interest, he often talks sense to me in his "dad voice."

27. The last song you bought or downloaded? "Frank Mills" from Hair.

30. Where did you live in 1987? On the other side of the tracks. Literally. If the train tracks weren't outside my current abode, I could see my old one from here.

33. It's been almost a decade. Where were you when 9/11 happened? I was getting ready for work. Putting on makeup when the first plane hit, tying my shoes when the second plane hit, and listening to the coverage on my Walkman, walking up Randolph, when the third plane hit. I got to the office in tears and was told to turn around and go home -- the Chicago Police were shutting our building down because it housed the Israeli consulate and no one was sure who was behind the attacks, or if Chicago and LA were next. In retrospect, I have no idea why I got on the train at all, why I didn't just stay home where I belonged. Shock, I suppose.