Proud of my city 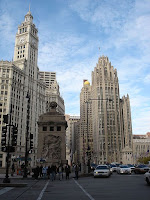 Chicago played host to the world with last weekend's NATO Summit, and it was a resounding success. There were protests up and down Michigan Avenue, in Grant Park, etc., but it was, by and large, peaceful. Which is amazing, since the mercury his 90º Saturday.

It's uniquely American, speaking truth to power on such a large scale. I'm glad the 99% felt their voices were heard, I was touched by the passion of the Iraq veterans who threw back their medals, I was proud of the police who kept everyone safe.

I was a huge fan of Mayor Daley's and was nervous about how we'd fare with  this rookie mayor, Rahm Emmanuel at the helm. Mayor Emmanuel did just fine.