I went to the doctor yesterday and got good news. While not cured, my seborrehic dermatitis is "responding to treatment" and "under control." I go back again in 8 weeks so the dermatologist can monitor my progress.

I'm so relieved. I've been obsessed with my itchy scalp and my thinning hair. It's nice to know I can move on.

All last summer I heard Bernie Sanders supporters rail against TPP. This trade deal was a deal breaker. If Hillary didn't come out against President Obama and side with Bernie on TPP, well then guess what! They wouldn't support her! Forget a woman's right to choose or who has the authority to nominate the next Supreme Court Justice(s). TPP! That's what this election was about! And if you weren't against TPP, you were a puppet of the oligarchy. 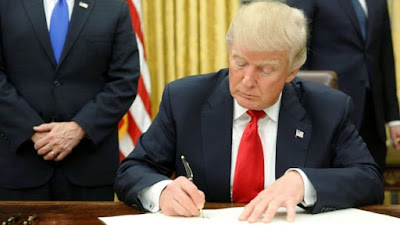 Hillary is in private life and Donald Trump is in the Oval and has withdrawn the United States from TPP. Happy now?

All last summer, I heard that Barack and Michelle Obama and Joe Biden had been co-opted by The Establishment. That they weren't progressive enough, not by the longest shot. They were supporting the disease-ridden future felon, Hillary. I was even treated to the ugly spectacle of President Obama being booed by Bernie Brats at the Democratic Convention (aka "The Coronation"). Biden, Barack and Michelle watched their candidate lose and Donald Trump is in the Oval Office. Happy now?

Now they're turning on Elizabeth Warren and Sherrod Brown. Their sin? Voting for Ben Carson as HUD Secretary. Of course they voted for him, you wretched nitwits! Presidents get to choose their own Cabinets and their nominees go through because that's the only way the system can work. How long should the Department of Housing and Urban Development go without a secretary? Without civil servants overseeing vital inner city services like lead paint abatement and Indian/Eskimo affairs? Someone has to do it or innocent people will suffer. Senators Warren and Brown understand this because they are adults. All they're getting for their responsible behavior is social media agita. (Besides, isn't this what y'all wanted? Thank God that disease-ridden future felon, Hillary, hasn't chosen her Cabinet!)

Sherrod Brown and Elizabeth Warren are two of the few players on the Democratic bench. Let's eat them alive now, weaken them like we weakened HRC, let's make Trump a two-term President. Let's ignore a woman's right to choose, LGBT rights, and all the other things that Brown and Warren (and Clinton) agree with you on. Let's cherry pick and find things like TPP and the HUD Secretary to destroy the party over.

PS I'm gonna need a ton of antacids over the next four/eight years.

There goes my touchstone

Back in the 1980s, when everyone was riveted by a rebroadcast of ABC's Roots, I wasn't. I was in my party girl phase and wasn't home much. One of my coworkers, a woman of color, was surprised I wasn't taping it with my VCR so I could have it in my library. I simply wasn't interested.

"That's because you don't know what it's like to turn on the TV and see someone like Kunta Kinte who represents your heritage and life experience!"

I was being flippant to end a conversation I'd grown weary of, but I was also uttering a fundamental truth: Mary Tyler Moore, in her three signature roles, was the ultimate 20th century WASP woman. 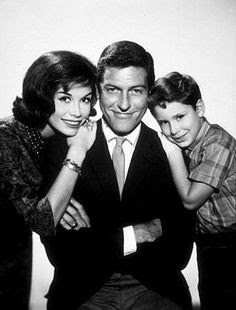 Laura Petrie. The Dick Van Dyke Show. 1961-1966. Always pretty, never a (bouffant) hair out of place. A trained dancer, she gave up her career when she married Rob. A stern but loving mother, hers was the parental voice Richie Petrie responded to. She cut coupons and carpooled and volunteered at the New Rochelle PTA. She was a loyal friend to her next door neighbor, Millie. She was the perfect hostess and the perfect ornament when Rob brought her to work functions. She wore slacks on occasion, but she also wore little white gloves with her dressier ensembles -- just like Jackie (whose look CBS consciously emulated). She was clearly the woman our mothers wanted us to grow up to be.*

She and Rob also seemed genuinely in love. To my little girl eyes, the Petries and the Riccardos were the only two couples I saw on TV that I believed when they kissed. No one expected her life to be like Lucy's but Laura ... Wouldn't it be great to have a husband like Rob and a nice ranch house in the burbs? We'd get a sitter and take the train and go see a dinner and a show in the city. Sigh.

Gender roles aside, when you watch this show today, it really doesn't seem that dated. The writing is that sharp, the performances are that good. MTM was just 25 when the show premiered. What a precocious talent she was! 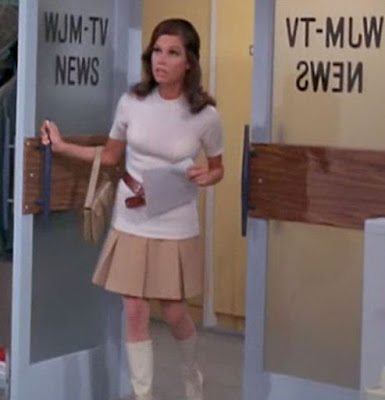 Mary Richards. The Mary Tyler Moore Show. 1970-1977. How perfect was she? Post-Watergate, she worked in journalism. Of course, it was an off-camera job at a local station, so it was something we could all imagine ourselves doing. She had the smoothest long hair, the nicest clothes and the niftiest little apartment -- to this day, I chastise myself for sloppiness because of how Mary made her bed and folded it back into a sofa every morning.

I've followed Mary's blueprint. My office life consumes an inordinate amount of my time, but I'm OK with that. My friends are my family. And yes, I'm still unmarried. If only I could turn the world on with my smile ...


Beth Jarrett. Ordinary People. 1980. Oh. My. God. If Laura and Mary were the idealized WASP women, Beth was the dark reality. The tagline for this movie is "Everything is in its proper place. Except the past." And that's why Beth's outwardly perfect life is her hell. Her oldest son is dead, her younger son tried to commit suicide, but she can't let herself feel any of it. Instead she makes lists and plays golf and lunches.

I love everything about Ordinary People, but especially Beth because she rings so true. It isn't that her (remaining) son is struggling that upsets her, it's that everyone but her knows he's quit the varsity swim team. What will they think? She hates that her son and husband are in therapy, but rather than confront that anger, she asks what one gives a therapist for Christmas.

I fight being Beth, but I feel like she's programmed into me. For example, I don't cry. My throat closes up sometimes, but I can't cry. It's not allowed. The very act of crying is as frightening to me as whatever triggers it. I think I can count on my fingers the people who have seen me cry. I know this isn't healthy. But it's "ordinary" for us WASP girls. 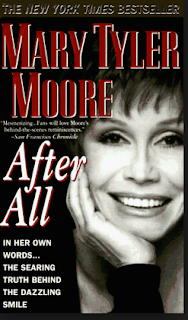 I suspect that, like me, the real Mary had a great deal of Beth in her. Somewhere in my den is her autobiography, After All, and I recall there was a lot more pain in her life than you might suspect.

Two divorces. Rehab. Diabetes. A miscarriage, and being told she could have no more children. Her sister died of a drug overdose and her only son died from a bullet within two years of one another.

But there were Emmy Awards and an Oscar nomination. Elvis once told her he had a crush on her! With her performances, and her production company MTM, she changed pop culture.

The lady herself died Wednesday at age 80. RIP, Mary. Enjoy the  serenity that escaped you in life. And thank you.

*Though my own mother never could stand MTM because of her voice.