For me, for Caleb, for the neighborhood

What a haul! I had over an hour to grab any books I wanted from those left behind at the library's two-day book sale. More than 100,000 books were donated,* and there were plenty left over.


For myself, I took the following: 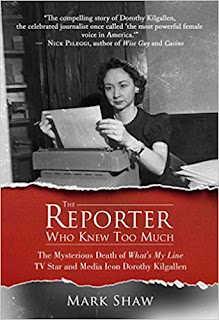 The Reporter Who Knew Too Much. Mark Shaw. Dorothy Kilgallen fascinates me. She was a media titan for a time, with a syndicated newspaper column and weekly appearances on What's My Line? A successful career woman when women typically didn't have careers. She wasn't especially attractive, or witty or charming. But she (must have) worked very hard. Today, she's all but forgotten. I look forward to learning more about her.

Shadows of a Princess. P. D. Jephson. The opposite of Dorothy Kilgallen is the also fascinating but extremely attractive, witty, charming and unforgettable Princess Diana. Jephson was Diana's only private secretary, beginning when she married into the House of Windsor and staying with her for a time after the divorce.

And the Sea will Tell. Vincent Bugliosi. Best known for locking up the Manson family, Bugliosi went on to be a defense attorney. Did Stephanie help her boyfriend Buck do away with another couple? Buck was convicted. Stephanie hired Vincent. We will see.

Alibi in High Heels. Gemma Halliday. It looks like a lighter-than-air bit of mystery/chicklit. And sometimes that's just what's called for.


For my book-loving friend Caleb, I selected the following:
Being homeless, he doesn't have TV or a computer for streaming media. So he practically eats books. I know he loves mysteries and he told me he wants to get into athlete's memoirs. Here's what I grabbed for him:

Tough Stuff. Sam Huff. I have no idea who Sam Huff is, but he played football in New York and seems like a tough guy.

Sisters in Crime, Volumes 1 and 2. Short mysteries by famous women crime writers, like Grafton, Paretsky and Muller. Might be a good way for him to meet some new authors.

Wish You Were Here. Rita Mae Brown and Sneaky Pie Brown. I know these mysteries are crazy popular and that Sneaky Pie is a cat. No cat has been loved more than Caleb loves his Napoleon, so I think this will be a hit.

Memoirs of a Geisha. Arthur Golden. Caleb's original copy was lost before he got to the end. Now he can finish it!

Dewey: The Small-Town Library Cat Who Touched the World. Vicki Myron. It's in practically mint condition. I should wrap it and send it with Caleb as a get well gift to his hospitalized wife.


For my neighbors:
The Free Little Library on the next block was nearly empty. So I picked up a couple James Pattersons, because I know those are popular, and a copy of Chris Matthews' Kennedy and Nixon, because I read it last year and liked it and think everyone should learn more about those two.

Sunday opened for us volunteers, but after we were shooed out at noon, non-profits were welcome to grab freebies. Hospitals, daycare centers, senior centers, neighboring libraries, etc. It made me happy to see a line of folks with wagons, waiting to give good homes to the donated books.

30. What color is your watch? I have several watches that I wear in rotation. And I'm not wearing one at all right now.

31. What do you think of when you think of Australia? "Do you come from a land down under, where women glow and men plunder?" The Men at Work song from the 1980s.

32. Ever ridden on a roller coaster? Yes, but not in years.

35. Do you have any friends on facebook that you actually hate? Hate is a strong word ...

37. Last person you talked to on the phone? The receptionist at my doctor's office.

38. Have you met anyone famous? Bruce Springsteen kissed me. It's a story I believe I've told more than he has.

39. Any plans today? I plan on going over to the library book sale. I believe I can take my pick of the books that didn't sell.


41. Biggest annoyance in your life right now? That Saturday is almost over and I didn't get anything done. Very frustrated with myself right now.

43. Last movie you saw? I just watched an oldie, Prince of
Players, starring Richard Burton. A 1955 movie about Edwin Booth, the stage actor whose career was overshadowed by the misdeeds of his brother, the infamous John Wilkes Booth. It was disappointing, but Burton was awesome, alternately playing Shakespeare, playing the lover and playing drunk.. And thought provoking -- up until now I never gave much thought to how many innocent victims there are to any crime. It's just the rest of the cast wasn't as good as the star.

Movie trivia tidbit: Raymond Massey played both a Booth and a Lincoln. In this film, he'sthe assassin's father. Decades earlier, he won an Oscar nomination for playing Abe. 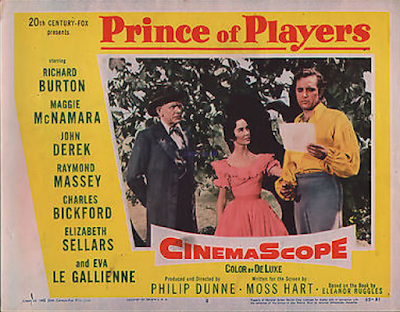 44. Are you allergic to anything? Bee sting

45. Favorite pair of shoes you wear all the time? This time of year, I love my Birkenstocks.


46. What time is it? Just after midnight on Sunday morning.

47. Do any of your friends have children? Yes.

48. Do you eat healthy? More than I did five years ago.

49. What do you usually do during the day? Stuff