Love Me Some Surveys

1. Has anyone ever made fun of your taste in music? Yes. A coworker disliked the Beatles because they were "too popular." Since that's so stupid, I didn't care.

2. Is anyone’s birthday coming up? My nephew's birthday is early October.

3. Do you remember who you liked in grade eight? I had a massive crush on Bobby Sherman.

4. When was the last time you burned any part of your body? Last month, I got a sunburn on my neck while watching the Cubs play within the Friendly Confines of Wrigley Field.

5. If I gave you ten dollars, what would you spend it on? Lunch
6. What are you most excited about right now? The NL Central race. I do not want the Cubs slated in the Wild Card slot!

7. Does / did either of your parents serve in the military? My dad served in Korea.


8. Are you somewhat of a perfectionist? Not really


10. Are all nighters something you have grown used to? I don't enjoy them, but can pull one if I have to.


11. Do you usually wear sunglasses when you’re driving? I don't drive, but my eyes are light sensitive so I wear them whenever I leave the house.


12. Do you wear your shoes around the house? Nope


13. What clothes are you most comfortable in? Jeans and a t-shirt


14. Are you good at painting nails? I can do touch ups, but I tend to leave this to the professionals.

Today's happiness -- Ladies who lunch.  I met Nancy for lunch and we lingered and blabbed for hours.

She's working again. Her kids are doing well. She's happy. It was a relief to spend some carefree time with her, as I've been so worried about Henry, and John, and my oldest friend. Being around her happiness made me happy! 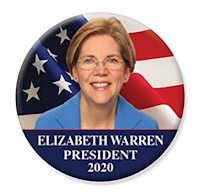 In 2016, my high school student nephew idolized Bernie Sanders. Bernie was the first politician whose words made sense to him. Because of his tender years, he was unable to contribute to Bernie's campaign coffers, but he worked around it by spending his allowance on every bit of Bernie merchandise he could lay his hands on.

Three years later, he's in college and canvassing for Elizabeth Warren in Davenport, IA. He was really stoked. He's a poli-sci major at Western Illinois University, and Warren was one of the candidates who reached out for help from the students. He was thrilled to be asked, thrilled to work on a real campaign, thrilled to help someone he now believes in 100%.

I'm proud of him. Jealous, too. Working a campaign for candidate you believe in can be as thrilling as falling in love. While I know that, of course, I won't vote for President Pussy Grabber, I haven't yet fallen in love.

And I'm sorry for Bernie Sanders. For if my unshakably loyal nephew can be persuaded to move to her camp, then the momentum is definitely in her favor.