Courtesy of Kwizgiver
Which urban legend ghost scared the bejeesuz out of you when you were a kid? Imagine that it's a late, moonlit night. You are in nearby Justice, IL, driving down Archer Avenue and are just about to pass Resurrection Cemetery. Suddenly a teenage girl appears by the side of the road. She's easy to see, even in the dark, because she has white blonde hair and is wearing a white party dress. It can't possibly be safe for her to be out alone, walking around near a cemetery on a night like this, so you roll down the window and offer her a ride. She wordlessly shakes her head and you start to pull away. Just as you're picking up speed, she somehow appears directly in front of your car! You cannot stop and are sickened by the thud and crunch of breaking bones as you run her over. You get out to see if there's anything you can do to help this poor girl. But there's no trace of her. For it wasn't a real-live girl you encountered … It was Resurrection Mary! (I can't promise this story is true, but I do know it's been repeated generation after generation here in Chicagoland.) 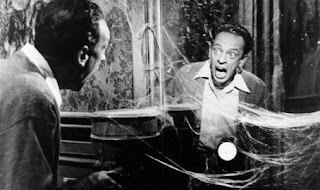 Which horror movie has the best premise? Don't laugh at me. OK, go ahead and laugh at me, but I loved The Ghost and Mr. Chicken. A reporter has to spend the night in a haunted house to prove whether the terrifying tales are really true.

What is the most disappointing “treat” to receive in your bag on Halloween night? Anything that wasn't wrapped properly and therefore thrown away by my mom

What’s the best non-candy item to receive? Quarters. The nuns always made popcorn balls to give out, and because they were so labor intensive, they never had enough to meet demand. I learned rather young to make the convent one of my last stops because the nuns felt bad about being out of popcorn balls and were very generous with the quarters.

Did a monster live in your closet when you were a child? No. Because he was in between the folds of my bedroom curtains.

Which supernatural creature sent chills up your spine when you were ten and still does? In Chicagoland, there were two genuinely awful crimes that got a lot of media attention. I still remember details. While these murderers weren't supernatural, they had an otherworldly grip on my imagination and haunted my nightmares: 1) Richard Speck, the bogeyman of my girlhood, who killed 8 student nurses in their home. Pockmarked and chainsmoking, even with his cuffs on, he looked like the perfect villain. As an adult, I view him with horrified 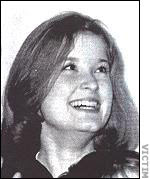 contempt. He was a failure at everything he did, except mass murder. 2) Whoever murdered Valerie Percy. She was the 21-year-old daughter of handsome millionaire businessman Charles Percy, who was running for Senate. She was stabbed and bludgeoned in the bedroom of their suburban mansion. Violence isn't supposed to happen to girls like Valerie, evil isn't supposed to make its way across manicured lawns like theirs. It was a sobering, scary crime. Senator Percy died recently without ever knowing who entered his home and took what was so dear to him. He was a good Senator and, by all accounts, a very nice man and I hope that where he is now, he is at peace and with his daughter. (That's Valerie's photo. I'm including no photo or link for Speck, because he was an asshole who doesn't really deserve any more attention.) The impact that these crimes had on me at the time, and the hold they continue to have on me, makes me question how much exposure to the news children should have.

What’s your favorite Halloween decoration? I don't know why, but I like gravestones.

If you could be anywhere on Halloween night, where would you be? Watching scary movies!

Haunted houses or haunted hayrides? I'm up for either one.

Which Stephen King novel/movie would you least like to find yourself trapped in? It. Penneywise is my own personal nightmare. 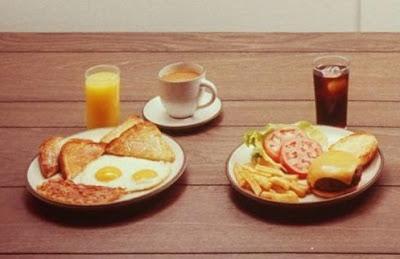 Now of course I didn't exactly consume all the food that's pictured. After all, I don't do coffee. But as my extended leave comes to an end, I wanted to do quiet things that I enjoy. And one thing that I love is a leisurely coffee shop breakfast. So I had steak* and eggs and potatoes and wheat toast and oj while concentrating on my book -- The Careful Use of Compliments, a lovely, leisurely (at least so far) contemporary tale set in Scotland, a land I'm unfamiliar with.

Then I went home, vegged out and slept. I woke up, paid some bills, did some laundry. And instead of the burger and fries shown, I had franks* and beans.

With laundry and finances behind me, I think I can devote my entire last day off to quiet happy time.

When I saw the envelope from the doctor's office, I didn't rip it open immediately because I assumed it was another bill related to my surgery. WRONG-O! It was my mammogram results, and it was good news.