This is going to be awkward

Barbara Bush died yesterday. As the wife of one President and the mother of another, she is a historic figure. Her funeral on Saturday will be by invitation only. Still, it stands to reason that our living former Presidents will be there out of respect.


Our current President bruised and battered the Bush family during the 2016 nomination fight. OK, I suppose that's just politics. But his insistence on continuing to accuse President Obama and Hillary Clinton of illegality -- apparently in an attempt to distract 40% of the population from his own formidable legal problems -- is unusual and ugly, even by the rough-and-tumble standards of politics.

So naturally one wonders what will happen this weekend at Barbara Bush's funeral. A look at body language makes it evident that the Bush family enjoys a warm relationship with those Criminal Clinton and Obama Clans. 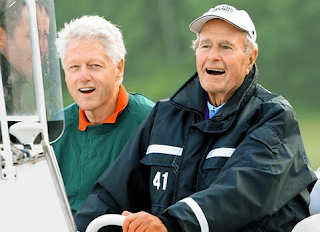 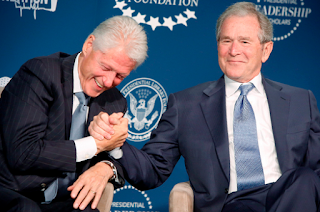 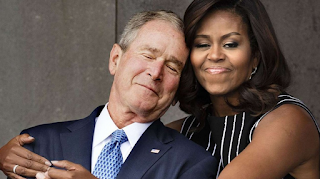 I predict President Trump will not attend the funeral, instead allowing the First Lady to act as his representative. I think he's too much of a coward to face Bill, Hillary, Barack and Michelle. Especially in an atmosphere where they are warmly welcome and he is, at best, treated with grudging respect. Besides, it would give Mrs. Trump an excuse to spend some time away from the White House.

The four pictures above make me happy. The Presidency is a daunting job. I'm glad these First Families get comfort and support from one another.

Writing this post does not make me happy. The situation at 1600 Pennsylvania Avenue is unprecedented and deeply unfortunate.

Your favorite color and why. 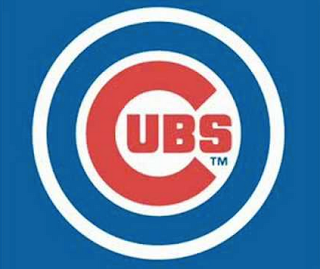