16.) What is your favorite wild animal? Okapi. They look like an other worldly mix of giraffe and zebra, though I believe they are cousins of the giraffe and have no zebra in their bloodline. They are shy and modest -- very rarely are mothers seen nursing their calves -- and herbivores. I'm crazy about them. They "talk" to each other, making a happy chuff noise to one another in greeting. (They don't communicate with us, just each other.)

I learned about them at Brookfield Zoo here in Chicagoland. Brookfield Zoo has had great luck in mating okapis and perpetuating this endangered species. Tampa's Lowry Park Zoo has a great okapi exhibit, too. I've read that they are also at Disney's Animal Kingdom. If you get a chance to observe an okapi, you won't forget him. 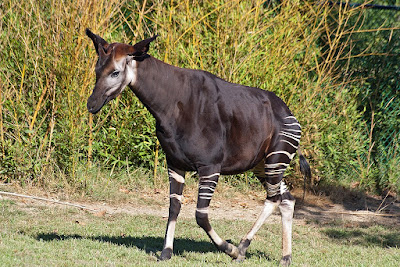 17.) Name 3 of your favorite childhood shows: Batman, Bewitched and The Monkees

18.) If you could live as a character in a movie who would it be? Jo from Little Women. Any of the three versions -- and I hear a fourth is one the way. I would love to share an umbrella with Professor Bhaer. 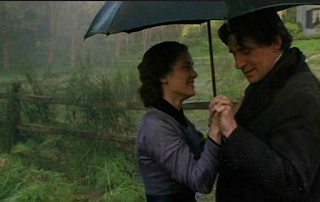 21.) If you had a dragon what would you name it? Puff. And I'd be much nicer to my dragon than that little bastard, Jackie Paper, was to his rascal Puff.

22.) What do you put on hotdogs? Ketchup and atomic green relish.

24.) What's your favorite way to get inspired? A shower.

26.) If you had to order from a kid's menu, what would you get? I wanted to on Saturday! A local restaurant has a mac/cheese/barbecue sauce dish on the kid's menu I would have liked to try.

30.) Do you play Angry Birds? I played with my nephew about a decade ago. 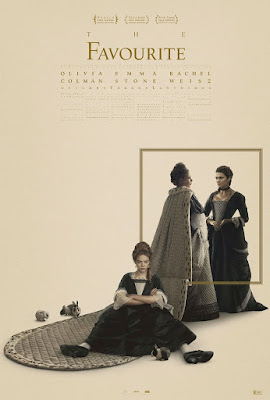 Oh, this movie! It's twisted and wicked and so very, very funny. The Favourite takes place during the 18th century in Queen Anne's court. The politics and hijinks are highly accessible, even if (like me) you aren't familiar with Queen Anne's reign.

Even with my only superficial knowledge of Queen Anne, I know some things in the movie weren't accurate.* But it doesn't bother me here as much as it did in Vice. After all, no one in modern-day England's take on today's affairs will be influenced by this movie. (Though I might feel differently if I was Brit.)

This movie is concentrating on gender, and tackles that age-old question: would the world be different if women were in charge? The answer is no. This woman-driven court is as filled with petulance, whims, sex, influence peddling and secrets as today's Washington.

It's also very, very vulgar. Be warned. A certain word that makes me cringe is used often and conversationally.

But this doesn't mean I didn't also laugh.

By the way, I was surprised by how many boys and young men were in the audience. Yes, I'm sure some were dragged against their will by their girls. But I think Emma Stone has slipped into that Julia Roberts/Sandra Bullock position as America's Sweetheart. (Even if she is playing a very bad British girl.)

*No one kept rabbits as pets back then. Anne's precious babies would not have enjoyed catered parties, but would have been lunch themselves.
Posted by The Gal Herself at 2/03/2019 04:23:00 AM 1 comment: