We've been here before, and it's not funny

This morning on the el, I was sandwiched tight between two disparate people. On my left was a working mom, in boots that looked butter soft and a scarf that probably cost as much as my coat. First she used her phone to issue after-school orders for her kids' daycare provider, then she turned her attention to the Politico website. I could see a picture of Gen. Michael Flynn looking very angry.

The man on my right was decidedly blue collar. His dark jacket was spotted by what looked like oil stains. His boots looked as big and heavy as Herman Munster's. He was wearing a Blackhawks cap. He was reading a story on his phone, too. And it was accompanied by a photo of Gen. Michael Flynn. 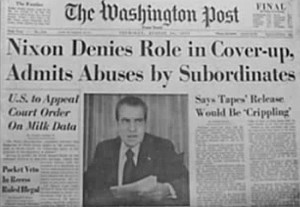 Bad news, Mr. President. People understand this story, and it's resonating.  Espionage and Russia have cut through the noise of our individual lives and captured our collective attention more than Hillary's email server ever did. This is not going away.

My mind went back to the summer of 73. I was riding my bike to my friend Judy's house. As I pedaled up the street, I heard the Watergate hearings live, drifting out through the open screen doors. The neighborhood grownups -- my parents' friends and my friends' parents -- were in a way united by Watergate and more interested in the hearings than they'd been in anything else I could recall.

Yes, the assassinations of the 1960s left a lasting impact on Americans of all ages. But those were sudden tsunamis. Watergate was different, it was a storm that grew slowly, steadily stronger until the winds blew the Nixon White House away.

I feel those winds starting to blow again.

I was never a supporter of Donald Trump's. In fact, I still cannot really believe that he is President. But I get no pleasure from this. I don't enjoy the sense of deja tragedy that is sweeping us all up.

It's familiar, but it's not comfortable. And I wish I wasn't so sure of how this long, painful saga is going to end.