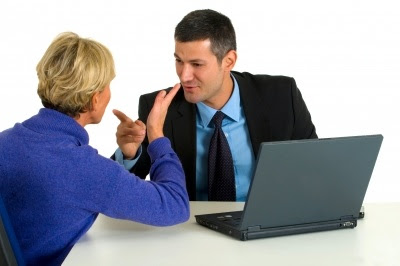 Had a pair of rather tiring meetings today. Both involved my boss.

The first had to do with a concept we're presenting to the client on Thursday. One of our account executives -- out today, celebrating her daughter's birthday -- left word that she wanted a revision she obviously thought was "no big deal" but I felt was a big mistake. I told my boss I was willing to do it, even though I was sure it was the wrong thing to do, but he had to tell me to. He had to make the decision.

We discussed why the absent account exec wanted to do it, why I thought it was a bad idea, and how I would implement it if he insisted. But he had to insist. I wasn't trying to be a diva, I wasn't being willful. I acknowledged her point of view but stated -- over and over and over -- that I thought she was moving us in the wrong direction and he'd have to be a boss and tell me to make the changes. At one point I got so desperately frustrated (remember, I was ready to make the change, all he had to do was pull the trigger) that I actually stomped my foot. Thank God for the conference room table.

Finally my boss decided on a resolution: To leave the project as he had approved it before the account executive reviewed it. Even though I had, technically speaking, won, the conversation was so animated and so lengthy that I needed a nap.

But I didn't get one. My boss then turned up in my office, asking for help with the performance assessments for the team (OOPS! I haven't done my self-assessment yet). I used to be a boss myself back in the day, so they come rather easily to me. But still, it took some time.

We got quite a bit accomplished. But it wasn't easy.

We're busy at work. It's a good thing, I know. But it's made getting to health club at lunch time difficult. That's why I'm enormously proud of myself that I not only spent 20 minutes on the treadmill on the 40th floor, I listened to the Spanish alphabet over and over through my headphones as I paced. AND I had baby carrots with dinner!