Unfamiliar with this week's tune? Hear it here.
1) In this song, Shelly West sings that she woke up late on a sunny morning. How's the weather in your part of the world? I'm doing this Friday night. We had a beautiful day. Sunny and 80º. It'll be cool enough tonight to sleep with the window open.

2) She wonders if she started any fights while under the influence. Who's the last person you quarreled with?

Well, I snapped at a jerk who passed me on the sidewalk. Does that count? He came up behind me, out of nowhere, and snarled, "Choose a side." Scared the crap out of me! I snapped, "Get over yourself."  "You were walking down the middle of the sidewalk," he said with disgust, as though I had broken some law. "OOOH! A pedestrian on the sidewalk! Alert the media!" I called after him. He may have had a point. But you don't come up behind someone like that and growl. Not with crime the way it is these days. He's lucky I didn't elbow him in the gut. Besides, I'm a fat old lady. I carry an AARP card! When do I start getting old lady respect?

3) OK, margaritas for everyone! Shelly sings that she likes hers with salt. What's your order? Classic or strawberry? Salt or sugar on the rim? Classic with salt, thank you! I do love a good margarita.

4) Jose Cuervo was a real person. He was one of the first to put tequila in bottles instead of barrels. Since bottles are easier to ship, it was a good decision. Tell us about a recent choice you're glad you made. I bought a "value pack" of six chuck tender steaks for $10.40. I'm a terrible cook and culinarily ignorant, so I wasn't sure what a chuck tender steak even is. It turned out to be a good purchase! Yummy, filling and affordable.

5) This week's featured artist, Shelly West, decided upon a career in music while still very young. She went on the road and sang backup for her mom, country music legend Dottie West, when she was still in her teens. When Sam was in her teens, she really didn't give her professional future that much thought. How about you? Did you already have career ambitions when you were in your teens? I was going to be a crusading reporter. I think every kid who was a student during Watergate wanted to be a crusading reporter.
6) In 1983, the year this song was popular, Sally Ride became the first American woman in space. Do you ever fantasize about being an astronaut? Nope.

7) Also in 1983, quarterback Aaron Rodgers was born. The NFL season is just kicking off. Do you have high hopes for your team this year? It's September! I'm still watching baseball!

My favorite-most Cub is now a Yankee and they're fighting for a wild card berth. I'm glad Yankee fans have embraced him and am impressed that, in little more than a month with the team, he already had his own bobblehead. It's a good likeness as bobbleheads go, but the fact of it hurts my heart.

8) In 1983, Motorola introduced the first cell phone. Do you have an easy time adapting to new technology? No. I'm kind of a Luddite.
9) Think of the last potato chip you had. Was it plain, sea salt, barbecue, sour cream and onion ...? It was plain. Not memorable, really, except that the container of Stax was on sale and near the register and I recall my complete lack of restraint as I grabbed them.

What they died for

On 9/11/01, 33 civilians and at least 2 crew members staged a revolt aboard United Airlines Flight #93. The plane had been hijacked. These ordinary people did something extraordinary. They stormed the cockpit, and crashed the plane into an empty field in Pennsylvania. Their heroism very likely saved The Capitol from a terror attack like the ones that hit The World Trade Center and The Pentagon.

Imagine getting on an early morning flight to San Francisco and finding yourself facing death. Imagine rising to the occasion and saving lives and a symbol of our democracy.

Imagine being the loved one of one of those passengers, watching this unfold at the Capitol on January 6, 2021. 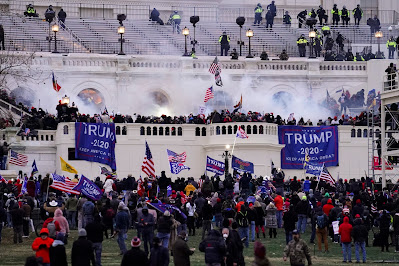 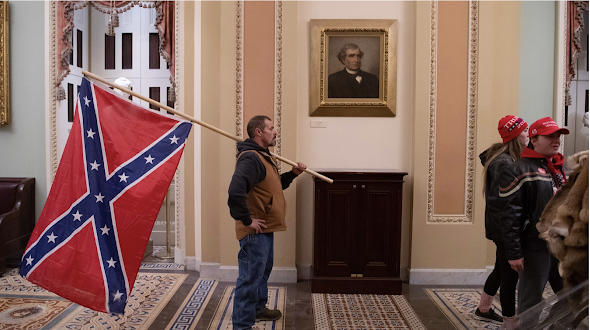 So imagine you're one of those who lost a loved one in that field on 9/11, who saw the twisted wreckage and knew they died to protect the Capitol.  Say a prayer for them tomorrow, certainly. This 20th anniversary must be excruciating.

But also say a prayer for them every time you hear Reps. Liz Cheney and Adam Kinzinger vow to get to the bottom of what happened on January 6. As a nation, we owe them at least that much. 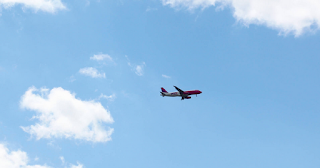 Thursday I ran a quick errand at lunchtime. It was a beautiful afternoon. The sky was blue and the clouds were fluffy white. I was enjoying it thoroughly.

Until I saw the jet.

Blue skies. Fluffy clouds. Low-flying plane. That's what New Yorkers saw on the morning of 9/11, 20 years ago. I was suddenly scared. I kept checking my phone to make sure nothing tragic had happened.