I have been thinking a lot about poop. Last night, in fact, I woke up pre-dawn, worried about it.

I took Connie to the vet Saturday. It was bittersweet, since it was an appointment I'd made for poor Reynaldo. But she needed her rabies shot, and hadn't had a good, thorough once over since Summer 2020.

There's good news and bad news. The good news is that her weight is fine, her eyes are clear, her heart and lungs sound good. Yay!

The bad news is she needs dental work. Not a surprise, not unusual. AND Connie was constipated. Palpating her belly and gut, the vet could feel the stool. Again, that was Saturday morning.

Since Saturday morning (it's now Thursday afternoon) she's only pooped twice. According to the vet, this is not normal. She sent me home with a laxative gel and said our goal was to get Connie defecating daily. She said in passing that if we can't establish a more stable pattern, we should do x-rays and see if there are tumors or obstructions.

Now she said this as she was drawing blood. She was offhand about it. But naturally, coming so soon after I lost Reynaldo, it captured my attention. So I've been dosing her Miralax, which is tasteless so it's not an issue. The laxative gel is a no-go, Connie simply won't have that. I've been giving her pumpkin straight from the can, which is a natural kitty laxative. Sometimes she'll eat that, sometimes she won't. 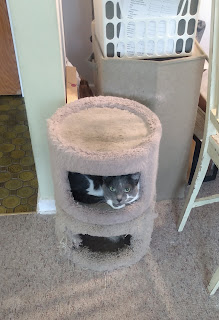 Trying not to freak out. First of all, while Connie is not young (she's 9, or 52 in human years) she's not as old as Rey was. So problems won't become dire as quickly for her as they did for him. Secondly, the vet did a complete blood panel and everything came back good. She's lively and affectionate, cuddling and playing with me every day. Also, where Rey was a thrill junkie who actually enjoyed car rides and being handled by the vet, Connie is a stereotypical fraidy-cat. It exhausts and stresses her. Exhaustion and stress aren't good for gut trouble.

So we're taking a wait-and-see approach. I'm keeping a diary of her meds and her poops (unfortunately still more meds than poops) until Saturday the 16th. Then we return to the vet for next steps. Hopefully by then her output will be fine and we can schedule her tooth extraction.

Yes, I've just written a 400-word Valentine to cat turds. The things we do for love!