1) When this song was popular, the Supremes were known for their elaborate hairstyles, make up and full-length gowns. When was the last time you got dressed up? The memorial service for my friend's husband. Even in her grief, she teased me. "Gal! You're not wearing jeans!"

2) "The girls," as they were known to the engineers and executives at Motown Records, were Florence Ballard, Mary Wilson and Diana Ross. They began singing together when they were high school classmates. Are you still in touch with any friends from your high school days? Just one. I owe my oldest friend an email.

3) Mary Wilson was born in Mississippi and her family moved a great deal before settling in Detroit, where she fatefully met Florence and Diana. Were you uprooted often when you were a child? Or did you spend your school years in the same neighborhood? My family never moved. My mom and dad both grew up in that town. Both sets of my grandparents lived there, too. My kid sister raised her family there, as well.

4) The Supremes began as a quartet called the Primettes. In addition to Mary, Flo and Diana, there was Betty McGlown. In 1960, Betty left the group to get married and was replaced by Barbara Martin. In 1962, Barbara left the group to have a baby. They quit trying to replace the fourth voice, soldiered on as a trio, and made pop history. Have you ever found yourself in a position similar to Betty's or Barbara's, where you had to make a difficult decision and choose between your personal life and your career? In my 20s, I was involved in a very, very unhealthy relationship. We met at work, where we were both writers. When he found out that I made more than he did, he freaked out. Did all our friends know? Was I trying to humiliate/castrate him? So I did something then that has me shaking my head today: I quit and found a lower-paying job. It turned out for the best, though, because I really hit my stride creatively and I went from having a job to a career.

6) With twelve #1 hits on the Billboard Hot 100, The Supremes remain America's most commercially successfully recording group, and this song (along with "Stop! In the Name of Love") is one of the most popular karaoke songs. If we handed you the mic this morning and absolutely insisted you perform, what song would you choose (any song, any genre)? This one. It has no notes that I can't hit.


7) Original group member Florence Ballard left the group in 1967. She died of cardiac arrest in 1976 at the age of 32. Since February is National Heart Month, it seems appropriate to ask: Is anyone in your life battling heart disease? My friend, John, suffers from congenital heart disease.

8) Florence Ballard's brother, Hank, wrote Chubby Checker's famous dance song, "The Twist." When did you last dance? I dance around the house all the time. I'm terrible at it, but it makes me happy.

9) Random question: Close your eyes and visualize the most beautiful place you've ever been. Now describe it to us. So you enter the structure and it's old. It's sunless and you can literally smell the history -- the beer and pretzel salt and hot dogs and sweat. Then you climb the gray cement stairs and VOILA! Everything is sunny and green and everyone is happy. That moment, when I see the outfield clock for the first time, never fails to thrill me. 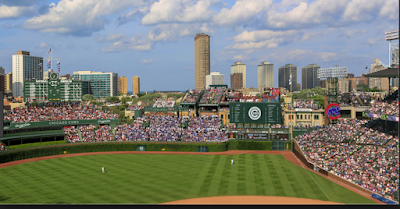 I realize that the country is reeling from yet another school shooting. This one in Florida. 14 students were mowed down on Valentine's Day.

I'm aware of it, of course. But it hasn't touched this old heart of mine. Because I simply can't handle it right now.

Because on Tuesday, this happened here.


Commander Paul Bauer was technically off duty but in uniform here in the Loop. Right in the center of the nation's third largest city. At 2:00 in the afternoon. He had just completed a training session of some sort when he heard a radio call. A suspect in a weekend shooting had been spotted around the The James R. Thompson Center.

AKA The State of Illinois Building. It's a government building, right in the middle of our theater district, surrounded by courthouses.

Commander Bauer approached the suspect. He took off. Bauer followed. Bauer was shot six times. In a stairwell in a government building. At 2:00 in the afternoon. In the nation's third largest city. The suspect was wearing body armor and had a Glock with an extra clip.

As the old folks used to say, "What is this world coming to?"

Commander Bauer's wake was held Friday, which would have been his and wife Erin's 16th wedding anniversary. He also leaves behind the little girl in that photo, Grace. He was 53 and had been a cop for 28 years.