1.   Did you become what you wanted to be when you grew up? Are you happy with your choice? When I was really little, I wanted to be a singer. Since I am completely tone deaf, this advertising writer thing was a better fit.


2.    Did man really go to the moon or was it a publicity stunt? It was a publicity stunt. The Clintons killed Jeffrey Epstein. The corona virus is a hoax and we should all go to the beach. If you believe otherwise, you're a sheeple.

3.    Given the opportunity to change one major aspect of your life (i.e. career, relationship, family) with no guarantee of the outcome, would you take the chance? Why? Wow. Great question! I'd go back to my mid-20s and get out of a very bad relationship earlier. I could have spared myself a great deal of pain and found myself with a less toxic view of love. Of course, maybe that pain was my destiny, maybe I needed to learn from that relationship, and so another equally rotten but different man would have somehow entered my life.

4.    Does money buy happiness? All money buys is less worry about money.


5.    What is the first thing you do when you wake up in the morning? Say good morning to this little gentleman. As soon as Reynaldo detects movement, he's there to make sure I haven't forgotten him (or his breakfast).

6.    What are we going to do when we run out of room to bury the dead? I didn't realize I was in charge of that.

7.    What is your greatest fear? Why? Is it rational or unreasonable? I'm afraid of dying in a plane crash. It's not the dying part, it's the descent and the screams of my fellow passengers that terrifies me. No, it is not rational.

8.    How do you feel about the exploitation of your private data in the digital age? Does it ever cross your mind or are you hyper-aware of the risks? It concerns me, but I don't obsess about it. (I obsess about many other things I cannot control, but not this.)

9.    You can be forgiven one debt. What is it? If you don’t have debt, then how did you do it? It would be nice to be done with the mortgage.


11.    What is your favorite thing in the world (aside from family, friends, pets)? 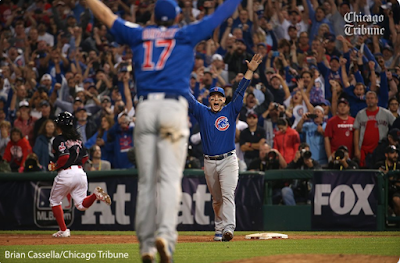 12.    You have to give up one of your five senses. Which one would you go without? Smell. It's already dulled when I'm fighting allergies, and I get by all right.

13.    Do you believe everyone has a doppelgänger? Nope.

14.    Likewise, does everyone have a soulmate or is it just a matter of proximity and circumstance? I'm a romantic at heart. I want to believe.

15.    Imagine you have a theme song that plays every time you enter a room. What would your song be? If this played, people would expect something light-hearted. I like that.

My favorite Cub has been doing us all proud ... again! In addition to Chicago and Miami, Anthony Rizzo is supporting hospital workers in Portland.

So now staying in the comfort of our own homes to protect our neighbors and ourselves is too much for some conservatives. (Gee, I thought we liberals were the delicate "snowflakes.") The fact that the President of the United States is stoking this on Twitter would be appalling, if he hadn't so numbed me with his mishandling of this crisis from the get-go.

It would be nice if, instead of pandering to his base, the President spent his time protecting all of us, as he took an oath to do. Mayor Lightfoot speaks for me: 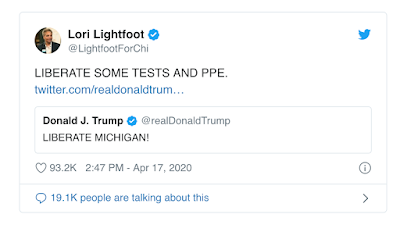 A friend of mine is married to a nurse and they have two preschool-aged daughters. This crisis is very personal to him.  He posted this card on Facebook and I agree. Everyone who shouts, "Liberate my state!" should be proud to print this card and carry it at all time. 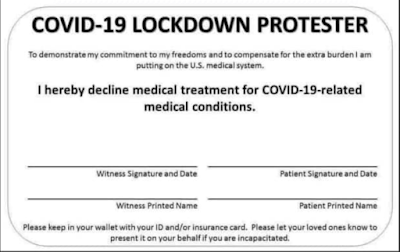 Colin Kaepernick endangered no one by taking a knee during the National Anthem to protest unfair policing. Yet he is pilloried by many of the same people who will needlessly put their own local police at risk with crowd control for their protests.

Consistency, thou art a jewel.