THIRTEEN CELEBRITIES
I HAVE OUTLIVED
There's a running joke between my old friend John and me, stolen from a greeting card: "Congratulations on your birthday. Now you can't die young."

We laugh at this because neither of us ever imagined living to be over 50, much less being happy and (reasonably) healthy over 50. Part of our attitude toward growing old came from the icons we admired who died young and tragically. There's so much romantic "what might have been" attached to these people that staying young forever had an undeniable appeal.

Here are 13 whose deaths seem especially poignant to me. Today I find it sobering that of the 13, there were 5 drug overdoses, 4 murders, 3 violent accidents and only one who died from natural causes.

* About Brian Piccolo. He's such a part of the fabric of this town that I forget everyone isn't familiar with this story! Brian inspired Brian's Song, the made-for-TV movie starring James Caan and Billy Dee Williams. He was a promising football player who happened to hit the big leagues with the same team at the same time and the same position as a genuine superstar, Gale Sayers. They were competitors for sure, with Sayers always winning, but they were also very close friends. At that time in America, they were the only black/white roommates in the NFL. Sadly, Brian received hate mail that referred to him as an "n-lover" for willingly sharing his room on the road with a black man -- even a black man as acclaimed as Gale Sayers. Brian treated the racially sensitive situation with enthusiasm, optimism, grace and good humor. He took this same approach to his brave battle with cancer -- embryonal cell carcinoma, to be exact. (Research supports that this cancer has a strong genetic component, so if this isn't a "natural cause," Betty, I don't know what is.) He was so beloved by the Bears, and all of Chicago, that the Halas family willingly took care of the family he left behind -- wife Joy, and three little girls (all under the age of 6 when their daddy died). To borrow from Jeannie Morris, who wrote Brian's biography, A Short Season, the most important thing about Brian wasn't how he died, but how he lived -- and oh, how he lived. I was in junior high as his story unfolded, both in the newspapers and then in Brian's Song, and his close and inspirational friendship with Gale Sayers had a profound and wonderful influence on the way my classmates and I thought of race. Looking back on his life now, when I'm nearly twice his age at the time of his death, I am awestruck by how much love and wisdom he exhibited in his exuberant and funny way. Some people are natural teachers, and I believe God gave us all the short life of Brian Piccolo so we could learn from him.

Is it OK that I find this funny? 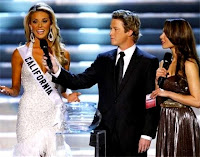 So Miss California -- you know, the inarticulate lass* who claims that mean homos cost her the Miss USA crown and then went on to champion the rights of "opposites" who want to marry -- may lose her crown. The sanctimonious girl who has turned her stumbling, bumbling response into 15 minutes of Religious Right fame kinda sorta lied to pageant officials. Seems she forgot to tell them she posed topless. Then, when a half-naked photo appeared online, she said she posed only once, as an audition for the Victoria's Secret catalog, and there were no other topless shots of her out there. Until more surfaced.

Gee, Miss California, I believe you shouldn't lie to pageant officials to get a shot at the Miss USA crown. Let me put it in a way you'll understand: I think that I believe that a person should tell the truth. No offense to anyone out there but that's how I was raised and that's how I think it should be between a beauty contestant and her pageant.

*Here's the quote from her televised pageant Q&A. She's a rambling idiot, and what's worse, she's not aware that most Gay Americans cannot choose whether or not to marry. "I think it's great that Americans are able to choose one or the other. We live in a land that you can choose same-sex marriage or opposite marriage and, you know what, in my country and my family I think that I believe that a marriage should be between a man and a woman. No offense to anyone out there but that's how I was raised and that's how I think it should be between a man and a woman." It's possible that she lost not because of her views, but because she's a shitty public speaker who can't construct a logical, coherent answer under pressure.
Posted by The Gal Herself at 5/06/2009 04:36:00 PM 3 comments: Links to this post