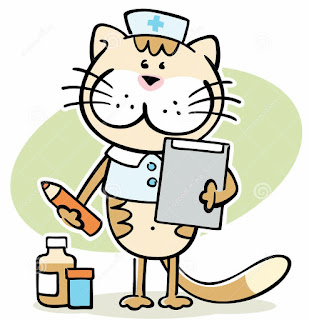 Joey and I had to be at the vet by 8:40 this morning, which means I woke up to an alarm clock for the first time in more than a week. I didn't like it. Neither did Joe.

I knew we were going in for an enema. I understood what this meant for Joey, but not for me. I thought I'd sit in the waiting room for a bit while the unspeakable was done to my cat. I didn't expect it to take two hours, and I didn't know they'd send me home. So I had to say goodbye to my old boy and walk home. I had brunch and then walked back to the vet, where I picked him up and had a cab bring us back home.

We were done by noon.

I can't recall the last time I had so many conversations about poop. Maybe when I was in the hospital in 2011, and they wouldn't let me go home until I "eliminated." At any rate, here's what's what:

•  Joey is suffering from chronic kidney disease (stage 3). This is not good. But Joey is so old that things are going to go wrong. If he was a person, he'd be over 90, and all bodies (feline or human) break down with time.

•  One of the symptoms of failing kidneys in cats is constipation. Joey still has a healthy appetite, which is good, but what goes in is not coming out.

•  Now he's, as the vet tech told me, "clean as a whistle" and want to keep him that way. So twice a day he'll get a pinch of Miralax.

•  He's also on a prescription medication called Benazepril, which will help regulate his high blood pressure and kidney function. He's much better about taking this than I expected.

I know this disease is progressive and incurable. I know that, sooner rather than later, I'm going to have to make the heartbreaking decision to euthanize my old gray and white buddy.

But I also know that right now, he is happy. He feels better than he did this morning. He loves sitting here with me and he endures attention from Connie.

We're going to see 2016 in together. That much I know. And right now, that feels like a gift.