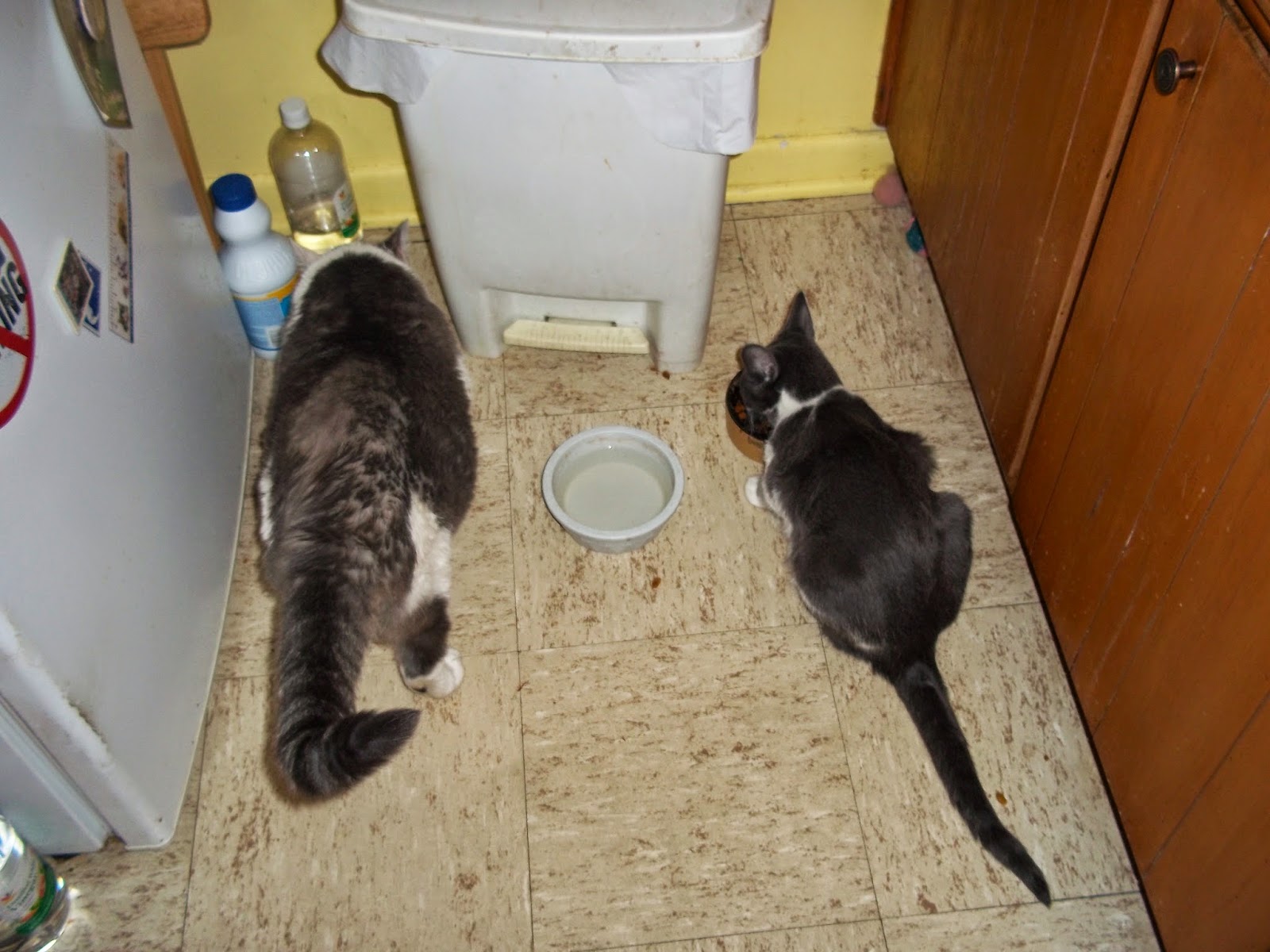 I've been looking at this picture a lot because I love the size difference between my massive old cat, Joey, and his new best girl, the petite Connie. Upon closer review, I noticed something I didn't like -- Joey's fur is a new color by the base of his of his tale. For more than 14 years, his coat has always been a uniform hue across his entire back.

I never noticed this when I pet him because he's very "one sided." He curls up on the same side whenever he sidles up against me for a cuddle or in the sun for a nap. But sure enough, when I checked him out, I can see that his coat is indeed thinning back there. 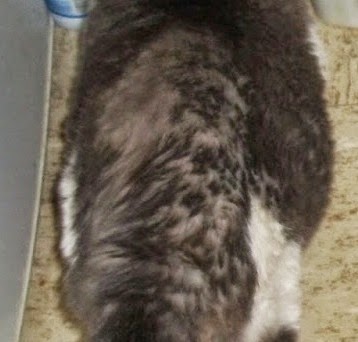 It might be a food allergy. Since Connie joined us, I have been giving her and allowing Joey to snack on Purina One instead of the prescription food Reynaldo must have. I thought it was an easy way to economize, since neither Joe nor Connie has Rey's dietary restrictions.

That ends today. Hopefully by the end of the month, Joey's lustrous coat will be back. If not, it's another trip to the vet. He'll hate it, of course, but it's for his own good.

What did I do on Monday? It started with work. I got in early, had a productive meeting, worked out, incorporated some client updates to our upcoming September mailing, and then I waited … and waited … and played Pogo canasta. That's the bad thing about being on the creative side. It's rather passive. I have to wait for my account team to bring me new assignments, have to wait for the client to respond to the work they have in their midst so we can make their revisions.

I felt kinda funky all day. No appetite and mild but tenacious tummy trouble. I bought my lunch but couldn't bear the thought of eating it. While I certainly could live off my hump for a few days (weeks?), I know it's not smart so I had ginger ale and a couple small slices of Lou Malnati's thin crust cheese/spinach pizza. (Free! I love it when there's food in the coffee room.)

I took a nap on the train home (yeah, I know; not a smart thing to do on the Green Line) and felt better. Then I had a light dinner with my friend Kathleen and saw Maleficient. Both were awesome.

My old friend has two fantastic kids and it was was great to hear all about their young adult lives. I've known those kids since they were four and a fetus, respectively, and it's been a privilege to watch them grow up. All I had was a grilled chicken sandwich because I was still worried about my gut, but all was good in the gastrointestinal department. 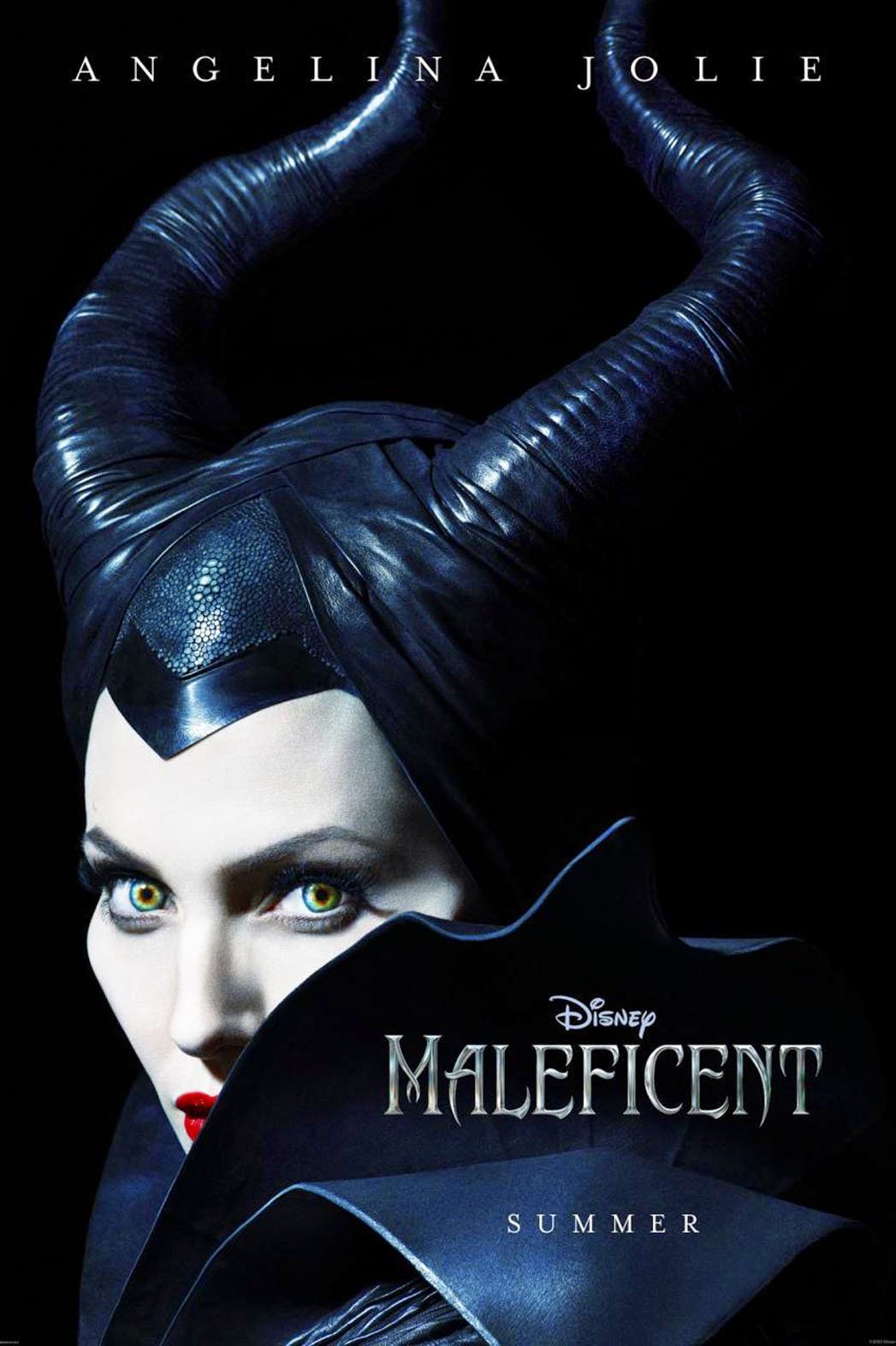 The movie was terrific. I'm not an Angelina Jolie fan, and while she's beautiful I was unimpressed with her performance at the beginning of the movie. She doesn't do sweetness and light very well. But boy, once she suffers heartache and gives in to rage ... WOW! You can't take your eyes off of her. Jolie may not a likeable screen presence, but she's more than credible as a force of nature.

I liked the story of Maleficent much better than the play it's not unlike, Wicked. Maybe because Sleeping Beauty isn't as dear to me as The Wizard of Oz movie. I'm a purist when it comes to the 1939 MGM classic.