1. What are you currently reading? The Perfect Mother by Aimee Molloy. A group of pregnant women, all due in May, initially meet through an online support group called The May Mothers. The begin getting together in person in the park, eventually bringing their babies. Come summer, they decide they deserve a night out, sans infants. It goes badly. In fact, it couldn't go worse. When they're out partying, one of their babies is kidnapped.
The author is creating a tingly sense of paranoia here. Each of The May Mothers wants the others to think her life is perfect, but each one has a secret. As the authorities and media focus on the missing baby, their personal lives are about to be exposed.

2. What did you recently finish reading? Agatha Raisin and the Quiche of Death by MC Beaton. A successful London PR exec retires to a sleepy village, and it doesn't start out well. She's bored and simply doesn't know how to behave in a bucolic setting. She decides to remedy this by entering the local baking competition. Now Agatha does not lose, and to make sure she won't, she enters a professionally-baked, store-bought quiche. She's disgusted when she still doesn't win, presumably because the contest was rigged. Things get even more complicated when the judge dies and an amateur sleuth is born ... out of a mix of pique and boredom.

Agatha is a funny heroine for a cozy mystery series because there is nothing cozy about her. She's really very prickly, grumpy, and more than a little entitled. But she's also smart and, as the story unfolds, a well-concealed sweetness begins to emerge. I like her, and I think I'll like this series.

Elon Musk's takeover of Twitter happened to coincide with the attack on Paul Pelosi, husband of House Speaker, Nancy Pelosi. Trust me when I tell you, this is not a good thing.

Angry Right Wing Nut Jobs and conspiracy-crazed MAGAs did not show us their best, self-proclaimed Christian sides. Take, for example, Donald Trump Jr. He never once wished the Speaker's husband a speedy recovery. He did, however, post this. 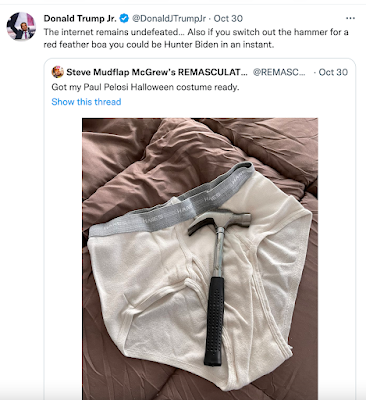 Now I suppose it's not a newsflash that the Trump family is a few quarts low of compassion. As Donald Jr.'s cousin Mary once wrote of her family, "The cruelty is the point." They seem to confuse brutality with strength. What does horrify me is that nothing distracts Trump supporters from holding their Bibles in one hand clicking ♥ with the other. Tweets like Trump Jr.'s and the affirmation he receives make me want to dismiss online Trump supporters as soulless pigs (but then I wonder, is that fair to pigs?).

Which brings me to Jimmy. Dear Jimmy. I have never met Jimmy, but we were brought together by my top reason for visiting Twitter: up-to-date baseball news. A New York-based Yankee fan, Jimmy is passionate and opinionated. He's also well informed, literate and polite. We've been trading tweets about Joe Maddon and his new book. 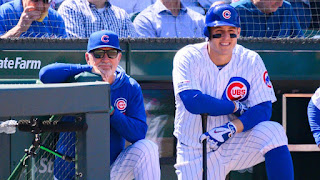 Anyway, I posted this picture for him. That's Joe Maddon managing the Cubs at Wrigley Field, standing beside my favorite-most ballplayer and Top 10 human, Anthony Rizzo who is, at least for now, a Yankee.

"I do dream of seeing these two back together," I captioned.

Jimmy loved, loved, loved it! We tweeted back and forth more about Joe's new book, which I've read but Jimmy hasn't received yet. That's when I saw his profile.

Life-long #Yankees fan; Conservative Republican, GOP; Traditional Roman Catholic, #Pro-Life Supporter,  President Trump #MAGA
My heart sank. So Jimmy supports Trumpy casual cruelty and spreads baseless, homophobic conspiracy theories about a crime victim?
No, he does not. The majority of his tweets since the weekend have been, well, to me. He's also posted about his new cellphone and a quote from Pope John Paul II. His only political tweet hoped that Trump will return to Twitter, now that Elon Musk is at the helm.
Jimmy has restored my faith in "the other side." No gleeful ugliness about the Paul Pelosi attack. No Q-inspired nonsense about the accused attacker being "Epstein'd" in jail.
I would like to ask him how he squares the circle -- how the Trump family graft, greed and ugly, violence-tinged rhetoric fit with the quote he retweeted about how "holiness lies in the effort to incarnate the Gospel in everyday life." But I won't.
Jimmy is not a performing chimp. He owes me no more explanation for his Christian faith than I owe him one for mine.
It's enough that I know that the 41% of Americans who still view Donald Trump favorably are not ALL WWG1WGA, tin foil hat wearing, conspiracy spouting, and filled with hate.