My girl is gone 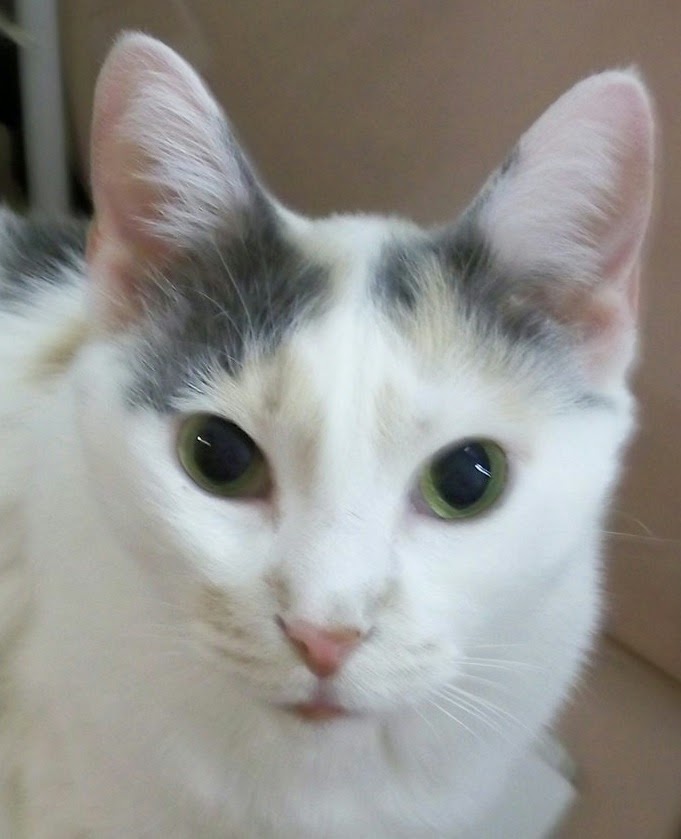 I left work today at 1:30, rushing through The Big Meeting and not much caring* because I just knew Charlotte needed an IV at the vet. It was a last minute emergency appointment, and they said they could squeeze me in at 3:30.

I thought she had the flu. After all, she wasn't avoiding me and the boycats like she had in February. She even purred as I fell asleep beside her on the futon Tuesday night. She really loved that furry green pillow from the old sofa. That's where she spent last night, too, in plain sight and not hiding under the bed.

She was much sicker than she was in February. Much sicker than she had ever been before. Her liver had failed. The vet showed me how yellow the inside of her ears and gums were, tell tale signs, and I felt awful for not having noticed. None of the lights here at home are as bright as the fluorescents at the vet and, even though I looked into her mouth every day, twice a day, to pill her, I never noticed.

They took some blood and gave her fluids when we waited for the results of her test. The vet was warning me that it looked very bad, but I wasn't understanding. After all, they took her temperature and she didn't have a fever! After she had the fluids, really very quickly, I could tell she was already feeling better, purring and giving me a kiss.

That, of course, was when we were alone. When the vet and the techs were tending to her, Miss Thing sent her mind far away. She was terrified by all unfamiliar those hands on her, of strangers calling her strange names like, "Little Mama."

When the results came back, the vet read me some dizzying numbers and added pancreatitis to the liver malfunction. She told me Charlotte would have to stay in the hospital for days to "at least have a shot." I held her tiny head in my hand, and she stared up at me with big, affectionate eyes, looking comfortable for the first time in days. I wasn't sure leaving her in a hospital environment was fair.

"I'm afraid if we get her well, we'll just have to go through this again in another three months," I said, starting to cry. Unselfish doesn't come naturally to me and I really didn't like the conclusion I was slowly reaching.

"I'm not sure she would make it three nights," the vet said. "I think you need to think about the short term, not the long term."

"She has never been this sick before," the vet said carefully. "Her liver shut down. I'd be worried about her if she was a strong, 6-year-old cat." Meaning my fragile 17-year-old didn't have a chance. She also told me that -- right now -- was the best Charlotte could expect to feel for days. And even then, she might not pull through.

I told her I hadn't even entertained this notion, and that I needed a little time. The vet left me alone and after a few minutes (I don't know how many) one of the vet techs came in and was telling me about how she recently found out her husband was cheating on her. She said she didn't know what to do. It was weird. I think she was trying to be kind, to distract me, and since I spend so much time at the vet's office I think she feels we know each other. We don't. I wanted to be alone with my girl.

She left and Charlotte and I were alone again. I looked in her face. I listened to her purr. I made up my mind to act out of love. I didn't want to let her go. I wasn't ready to let her go. But I couldn't stand the thought of her dying in a hospital, with strangers handling her and calling her, "Little Mama." Divas are not "Little Mamas," and Charlotte was always regal and always had attitude.

I didn't want her to hurt. Because of her age and her failing liver, the only sure things in her future were discomfort and fear. Wellness was not likely. Here I had an opportunity to ease her out of life without pain. It would be monstrous of me to not let her go.

So I knelt on the floor and looked into her eyes as the vet gave her the shot. I cooed, "Charlotte Anne," and "Girlfriend." I could tell she saw and heard me … until she didn't.

She didn't die among strangers, and she didn't hurt. So I have sadness but not regret.

Charlotte was (best guess) 17 years old. She joined and immediately began dominating this household in 2001. I gave her the best life I could. She gave me her affection and her support. I will miss her walking along the back of the sofa and rubbing my head with hers, and her help in the mornings. Who will sit on the toilet seat, watching me put on my make up, or jump into the armoire as I select the day's blouse, or chat with me every time I enter the kitchen?

I was fortunate to know her.