Of friends and film 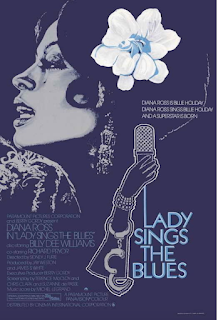 My friend John has always been a massive fan of Miss Diana Ross. So am I. It's one of the first things we bonded over when we met in 1981.

Naturally, when I saw that TCM was bringing Lady Sings the Blues back to theaters for the 50th anniversary, I asked him if he wanted to go. He invited two other friends that we knew back in the olden days, Gregory and Vanessa.

John was not having a good day, physically. He needed his cane. Sometimes he gets fatigued easily and has trouble walking. He was also in a very grumpy mood.

"A mask through the whole movie? It's 2 and a half hours!" Do germs only fly through the air during coming attractions?

"Now I've got to get out my vaccination card?" He grumbled, balancing his backpack and rifling through it. What did he think that sign out front -- MASKS AND VACCINATION CARD REQUIRED FOR ENTRY -- meant?

I went full-metal Mary Poppins in the direction of the ticket taker. "We're not mad at you, of course," I bubbled. "It's just hard to get used to the new normal. Then, once we get used to it, all the mandates will be dropped and ..."

John realized what I was doing and was apologized to the kid. "I'm sorry," he said, "I'm a grumpy old fart. It's not you."

It made me sad that my friend John is that grumpy old fart with a cane. I remember him dancing from night into morning. He's the one who was bored with the latest trend before I even heard of it. He's just a year and a half older than me and he needs a cane.

But he did love the movie. I was sitting next to him. I could tell. After the movie, we stopped for a drink in the bar across the way. Vanessa, Gregory and I were almost in the booth when we saw John ambling over behind us. The cane, and not being able to find his vaccination card in his backpack.

But when he joined us, he said it was "exciting" to see the movie starring his "girl" and that he couldn't believe it had been 50 years. Then he added that he also couldn't believe that the four of us have known one another more than 40 years. He thanked us for sharing it with him.

Last night, before bed, he sent out a group text, saying that he remembered the last time all four of were in the same room: his 40th birthday party. More than 25 years ago. He reiterated that he feels "lucky" we're all still in his life.