THIRTEEN THINGS
YOU SHOULD KNOW
ABOUT THE COMMON COLD
Because I'm obsessing about the sniffles, coughs and drips that plagued me for a week and are just now drifting away ...

1) Colds usually begin with a low-grade fever and a sore throat, frequently accompanied by fatigue.

2) It's during the first three days of a cold that you're most contagious.

3) Post-nasal drip causes the sore throat and, eventually, the cough.

4) At the beginning of your cold, your nose will drip with watery secretions.

5) As the runny nose develops into a cough, the secretions will become thicker and darker. Mine were a yellowy-green. Let me assure you, it was as attractive as it sounds.

7) Children tend to come down with colds the most often, as many as 10/year, and it's estimated that 22 million school days are lost annually because of colds.

8) It's normal for an adult to have between 2 and four colds a year.

9) Statistically speaking, women have more colds than men. It's often assumed this is because women have closer contact with children.

10) While colds are not caused by cold weather, they do occur most often in the six coldest months of the year (October through March).

11) Some researchers believe this is because cold weather makes the inside lining of your nose drier and more vulnerable to viral infection.

12) Smokers get more colds than non-smokers, because smoke dries out your nasal passages.

13) It's been suggested that exercise can help prevent colds because it makes you breathe faster to help transfer oxygen from your lungs to your blood. If this is true, why did I get sick almost immediately after joining a new fitness club? HUH?

Thanks to WebMD for all this information.

I'm with you, Professor Jennings 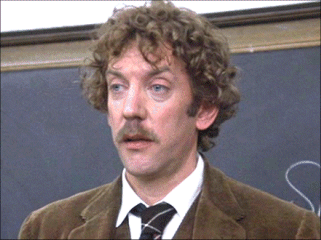 As Faber College's renowned English instructor, Professor Dave Jennings, famously said to his class at the bell, "Now I'm waiting for reports from some of you. Listen, I'm not joking. This is my job!"

That's how I feel today. One of my coworkers and I didn't agree on a headline for a postcard. She wants me to replace it with a headline we have used elsewhere. I have no issue with changing my headline, I just don't want to do the same thing we've done before. It's an infinite universe -- I'm sure I can come up with something new and different. I'm not being a diva, I just believe that recycling that old headline is sloppy and lazy. And she wants what she wants.

When I left my office for less than 20 minutes to pick up a ham and Swiss sandwich, she took the postcard to my boss. Then, while I was on the phone checking on my sick mother, she left me her revision on my desk with the notation, "As I discussed with Mike ..."

My boss is a go-along-to-get-along kinda guy, way more concerned with the Big Picture than I am and a big fan of workplace harmony. So when I confronted him about this, he was very conciliatory -- telling me he didn't think her suggestion compromised the project in the consumers' mind. After all, they won't remember a simple postcard headline once they have read it. True, but while consumers won't remember the majority of what I write after they read it, clients do, and that's no excuse for sloppy, lazy creative. I'm also less than thrilled that a coworker did an end run around me.