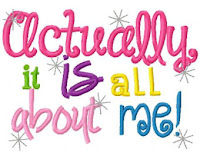 This cordiality makes the day go faster/easier, but it masked something I always knew about her: she's fundamentally self interested.

I told her about a guy I went to grade and high school with. He's kept up with my oldest friend via Facebook and coincidentally is a musician whose path crosses regularly with my favorite cousin's. So when I got the "friend" request, I clicked "yes." He looooves all my posts. I mean, we seem to have a scary amount in common. We even get our hair cut at the same place. So I was thinking of reaching out to him. Except, I added, I really have no recollection of him past junior high. So, I joked, wouldn't it be like dating a 7th grader?

"Who? Who are you talking about?" She clearly hadn't been listening. Even though it was just her and me sitting there at the round table in our office. So I patiently repeated it all again.

"If he's never been married, he probably is like a 7th grader," she said -- not only completely missing my point (that I last remember him in junior high) but again not caring if she offends the never-married me.

Because we were no longer talking about her.

In the past, she has gotten jealous when coworkers talk to me about The Cubs, because she can't participate. (And believe me, that's a CHOICE. There is no dearth of information flying through the ozone about the Bears and the Cubs.)

I've also been thinking about the way her last relationship ended. He wasn't attentive to her. He didn't interest her. Valid points, I'm sure. But still, it occurs to me that she never seemed to have a moment of self doubt about whether she was a good lover for him.

And, for some reason, she is opposed to my helping Napoleon's family.  Come to think of it, I've never heard her mention a cause or charity she truly believes in.

I am cataloging all this not to slag her. It's to remind myself. Someone like me can be very badly hurt by believing someone like her is a true friend. She can't be. She can't get out of herself long enough.

This is the way she is. She's over 55 years old, and expecting her to be different is folly. We can be friendly, but not friends.

With the thaw, Napoleon is wide awake and livelier than I've seen him all year. Literally leaping as high as his leash would allow as he tried to capture a discarded styrofoam cup or climb into his mom's jacket pocket. It was a delight to watch.

And even better, his "parents" have a lead on a room to rent! One they can afford, every night. It's in Chicago's Boystown, the very gay neighborhood. An older gentlemen* owns a house that's in disrepair and he's looking for tenants to help him raise the cash to fix it up. But he won't rent to gays. He'd rather have Caleb and Randi, a married couple, and little Napoleon. Plus Caleb has carpenter skills. For $525/month, they will get their own furnished bedroom, access to the kitchen and (most important to them) bathroom. They have to come up with $1050 cash (first month's rent and security deposit), which will take a while. But the old guy* has more than one bedroom to rent so even if it takes till March 1, they are confident a room will still be available.

Caleb is working! It's part-time, only a few hours/night. It doesn't pay much -- and the employment agency takes something off the top -- but it's a real job. Enough to pay the rent on the room (just the rent, not their food or transportation costs). He drives a forklift over night at a grocery warehouse. I'm proud I could help him get that long-ago, teenage shoplifting conviction expunged, because he acknowledged he didn't have to sweat the background check this time. He and Randi continue to augment this by panhandling, but it's a start.

Randi has a job interview Thursday at 1:00! There's a chain salon that needs "help." She didn't specify what she'd be doing, exactly, since she's not licensed in Illinois. Perhaps shampoo girl. Anyway, she just found out about the interview Wednesday afternoon when she went to the library to check her email. She asked me to help her because she doesn't have any "black dress slacks" for the interview. I gave her $20, which I had because my boss took our little team out for lunch today. She'll go to Goodwill first thing in the morning and pick up her interview outfit. (They kept saying they'd pay me the $20 back and I told them to forget it. Now I wonder if I should have said that. There is pride involved. I think I will refrain to giving them any money next week, and explain, saying, "you know, because of the $20.")

I'm less confident about her prospects than she is. I worry about the figure she'll present tomorrow in her new/used (and likely unlaundered) blouse and slacks. I hope she gets to take a shower tonight.  Also, it's supposed to be wet and in the teens and 20s over the next few days ... Oh, well, fingers crossed.

It's been so long since they had anything to celebrate. I hope at the very least, February or March finds them indoors. They told me that when, given the opportunity to sleep in a bed (instead of the sleeping bags in their tent), Napoleon loves burrowing under the covers next to Caleb's feet.

Because of his birthday on Monday, I've been thinking about Elvis a lot this week. I watched King Creole and Elvis and Nixon. And Grease.

I don't really like this movie very much. It's so synthetic. The cast is entirely too old (example: Stockard Channing was 34 when she played the 18-year-old Rizzo). It lacks the grit and sincerity of the original Broadway production. Yet it remains ridiculously popular. My friend Kathy tells me how both her daughter and granddaughters watch it over and over and over and know all the lyrics.

Watched through that prism, as family entertainment (something the play was never intended to be), I really didn't enjoy Grease. It glamorizes smoking and drinking and unprotected sex, without showing any of the consequences. And then there's "Greased Lightning," the number where Travolta channels his inner Elvis. He's got the hair and the hips but here he's something Elvis never was: vulgar. 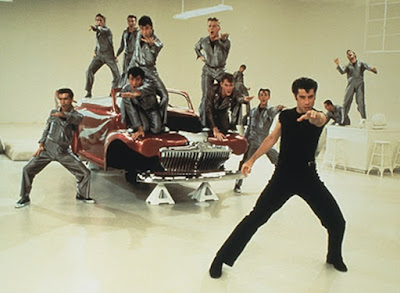 The thought of generations of little girls hearing these lyrics and thinking it's OK for boys to sing/feel this way makes me very uncomfortable: