That's the blurb on the cover of the Dec. 11 Allure magazine. (I just now got to it, so sue me!). The story talks about how difficult it can be to be pretty -- how, for example, when an attractive woman makes a mistake, it's assumed she's not trying. My first impulse would be a snort, if it wasn't for the experiences my best friend's daughter has had growing up beautiful.

With apologies to a reader named Jennifer who feels I write too much about my friends, my best friend shared with me how confused and ambivalent his daughter was at 12 and 13, when she was freakishly beautiful for a junior high school student. (Really, she did look like a miniature Michelle Pfeiffer.) The attention from older boys was scary. The resentment from other girls was sad. The praise from adults was embarrassing because it felt undeserved. As a result, she became both shy and passionately athletic. After all, when she makes a goal in soccer or reaches the end of the pool first, it's an objective, indisputable achievement -- made without the benefit of her platinum hair and high cheekbones.

It may sound strange to say this, but I am pleased to report that now, at 15, she has hit her awkward phase! In her most recent photos, her forehead is a little too round and her teeth are a little too big. Hurray! In short, she looks like a cute, scrubbed high school sophomore, almost indistinguishable from her girlfriends. Which is precisely what she longs to be. 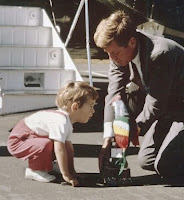 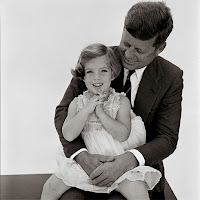 Just because she looks average today, she still might be a great beauty again. Or perhaps she peaked at 13. One thing I learned from my obsessive Kennedy watching is that it's possible to peak too soon. I give you the example of Caroline and John Kennedy, Jr. She was an adorable little girl who never took a bad picture ... until she hit 10. He was an average little boy who grew up to be The Sexiest Man Alive.

At any rate, my friend's daughter now knows what Caroline Kennedy Schlossberg's life seems to illustrate -- that there are more important things for a woman to be than pretty.