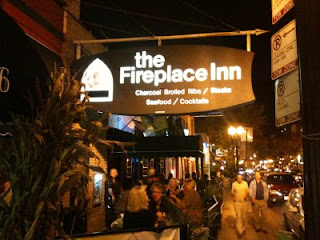 Tonight John and I celebrated his birthday. It was a subdued affair, as befits a man who has suffered serious health problems over the last seven months or so.

We went to The Fireplace Inn for some fantastic barbecue. I had ribs, he had chicken, and we were both happy with our choices. And I know I drank too much. (Who ordered all that vodka?)

This is a restaurant he loves and that we have seen change a great deal over the years. In the 1980s it was very much a steak house, with dark paneling and soft jazz and subdued voices. Now it's more of a sports bar (fine by me, I like looking up and seeing the Cubs coming at me from each wall). The menu has stayed mostly the same, and we're glad of that. We're fans of their mild, smoky barbecue sauce. We were seated in odd little alcove, barely large enough for two, upstairs. Later I realized we were dining where they used to display the Christmas tree! At least they didn't hang lights or ornaments off of us.

It was the perfect setting for our impromptu reflections on our friendship. John told me that he appreciates how there's "no drama" in getting together with me. I never forget a birthday, I don't take his schedule for granted, and if he invites a friend to join us I don't bitch about it. He says that the older we get (and we have been friends for 30 years now), the more he appreciates how comfortable it always is with me.

And I told him that birthdays are the one day a year reserved especially for telling people how much they mean to us. I told him we have 30 years of shared history and that deserves to be honored. People come and go from our lives. 30 years ... wow.

On a separate note, I'm happy to report how much healthier he looks than the last time I posted about him in March. He no longer needs a cane and he's lost that white beard. Hurray! Even so, we were home by 10:00. We're older now. Back in the day, we were just hitting our stride at 10:00 and knew where to go for hearty, greasy breakfast food after 2:00 when the bars closed.
Posted by The Gal Herself at 7/01/2011 11:14:00 PM 2 comments: