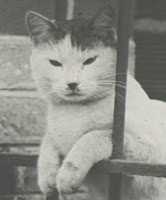 Today's happiness: My job. Yeah, I know I complain about it. A lot. And there's much about it that isn't perfect. BUT, as I sit here, preparing to shut down the computer and head home, it occurs to me that it offers me much to be grateful for:

•  The location. The view from my desk is breathtaking. I can see sailboats on Lake Michigan from here.

•  My client. I really respect them. That's a blessing. I have had clients in the past that got off on making their agency jump through small, fiery hoops. My client's corporate culture is open and honest and collaborative -- a rarity!

•  It's a good fit. There are times that I realize that the assignments we get match up well with my skillset and that I am good at this job.

How about you? What's made you happy this fine August day?

The Challenge is really very simple: "Each day in August you are to post about something that makes *you* happy. Pretty simple. And, it doesn't even have to be every day if you don't want it to be. It's a great way to remind ourselves that there are positive things going on in our lives, our communities, and the world."

Since this year I long for contentment, I have chosen this charming gent as my Happiness icon. I love that look of satisfaction on his face. I call him Augie. I discovered him while clicking through the Life Magazine photo archives looking for something else, and fell in love.

Of course you're encouraged to visit the other Happiness participants, but it's not mandatory. And if I miss a day because I'm away from the computer (which I may be at least one weekend), feel free to post on your own and visit other bloggers without me.

Augie and I aren't much for rules. The motivation behind the August Happiness Challenge is simply to give us each a moment to reflect on the positive things in our lives.

So simply think of it as a pleasant little blogging prompt, not a challenge to be conquered. That's the way I've been doing it every year -- without agita -- since 2007. And that's the way I'm going to continue. Because it makes me happy.

It's that time again! 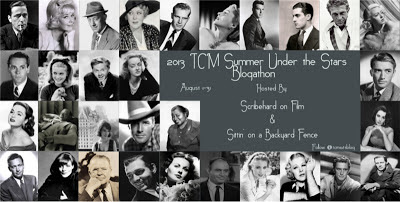 TCM Summer Under the Stars kicked off this morning with a full day of Bogart!

I love how TCM chooses 31 great performers and highlights them, one by one, all day. And I love the TCM Summer Under the Stars Blogathon hosted by Scribehard on Film and Sittin' on a Backyard Fence. They have collected a great group of cinema-loving bloggers, and the posts are always such fun to read. I recommend you check them out. 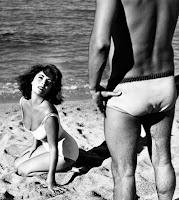 And I'm participating this year -- at least once -- with my thoughts on one of the most spectacular casts ever assembled (Taylor, Hepburn and Clift!) in one of the weirdest, most fascinating big budget movies ever made, Suddenly, Last Summer. Come back on Friday, August 23. That's the day La Liz is featured by TCM, and the eccentric Suddenly, Last Summer will be featured here.

"But it was small minded and elitist."

"And it was just one paragraph of a six page booklet."

"Exactly! It was just one paragraph of a six page booklet! That's why he should have let me keep it!"

So goes the internal dialog I have been having with myself for two days.

The project we're working on is about handling money for young adults. My boss, whose son is in

college on the five-year plan (the kid has had health problems), had me take out any references to budgeting for child care, long-term savings for a mortgage/a child's tuition/retirement, and the bullet point in the paragraph about emergency funds that referenced paying for groceries or utilities if you lose your job.

He says that "no one under 25 cares about that stuff."

I ride the el with young women (and occasionally young men) who are under 25 and have small children. Where are they going? I've always assumed that there is an affordable child care facility nestled somewhere within the skyscrapers where they work and Harold Washington College where they go to school. Apparently these women do not exist.

Likewise, the administrative assistants in our own agency, or the mail room staff. Under 25. Working 40 hour weeks. I suppose that we would advise them NOT to have the automatic deductions made for life insurance or retirement? Or maybe we wouldn't bother, because in his world, they don't exist.

He said that the line about paying for groceries if you lose your job should go because kids would just say, "Dad, I lost my job at Jimmy John's. Send me money." So I guess my niece, a college student who would be lost without her job because her parents are financially strapped, doesn't exist.

Bottom line -- he's my boss. He made the cuts and they are gone.

The elitism pisses me off. It's not only small minded, it's bad for business. Our client is not Charles Schwab. The people who would turn to our client for financial advice are not upper middle class or better.

And I hate it it when some of us deem others of us invisible.

But I have to let it go. I think it's taken a toll on my complexion! (See post below.)