1. What Are Three Things You Need To Buy? 1) Another bra. I discovered a brand/size I like, and now I want one in another color. Beige? Rose? 2) New undies. 3) I'm running low on sweet relish.

3. What Was The Last New Thing You Tried? I had lunch in a new restaurant. I'm glad I did. My ham/cheese panini was delicious and gooey.


4. What Mood Were You In Today? It's Easter Sunday and I just got back from church. I feel hopeful and grateful.

5. What would be a better name for the color of goldenrod-colored paper? I see no reason to change the name.

6. Where did you get your silverware? Most of it, I bought. Some of it I inherited from my icky grandmother.

7. What artifact from this past week would you have bronzed as a keepsake and heirloom? I had a fortune cookie with my egg foo young yesterday. It said, "Your plans will come to fruition." That would be nice.


8. What was the most recent ceremony you attended? Easter morning service.

10. What life lesson did you learn the hard way? We can't change people.

11. What do you wish you spent more time doing five years ago? Exercising 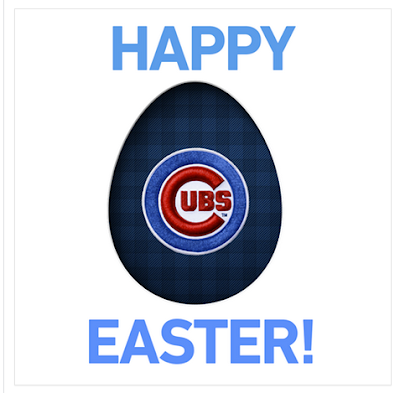 13. Have you done anything lately worth remembering? I want to always remember my interactions with Napoleon and his humans, Caleb and Randi. I have learned so much about how some of my neighbors are living.


14. What does your joy look like today? My fur family is happy and healthy. 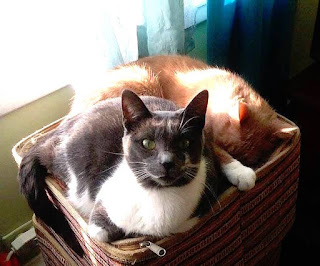 15. When you are 80-years-old, what will matter to you the most? I hope I will be able to take joy in the little things: walks in the sun, listening to the Beatles, watching the Cubs. Maybe by then, the other distractions will be boiled away and I can focus on the lovely little moments.

Happy Easter from Me and the Lads 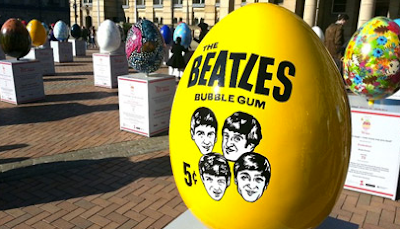 In 2012, London hosted The Big Egg Hunt. Oversized fiberglass eggs were decorated and hidden throughout the city. According to the Guinness Book of Records, this was the biggest Easter Egg hunt ever held, with 12,000 participating.

On Easter, the eggs were brought together in Covent Garden and then auctioned off, raising more than $900,000 for charity.


1) It can be competitive. I don't like myself when I'm competitive. And yet, on my birthday, I look to see how many Facebook birthday wishes I received, concentrating on the number of messages rather than what they say.

2) It celebrates the superficial. When people post mundane stuff -- like the laundry detergent they use or what's included in their brown bag lunch -- they get ripped for being self involved or (worse) boring. So instead, we all post about the glam stuff. Let's take a peek at the FB page of my former coworker, Doreen. Because her husband is partner in a law firm with offices in both Chicago and New York, she has apartments (beautiful condos) in both Chicago and Brooklyn. In March she posted about her boxing lessons at a trendy Manhattan gym, posed with bagpipes on St. Patrick's Day at a chic fundraiser for the FDNY, and had lunch along the Potomac with girlfriends (a quick getaway to DC). Now, I could ask myself if all this makes her happy, or I could just be happy for her. Instead, I hate how dingy my life looks next to hers. Thanks, Facebook.

3) Disinformation. We all know about the political shenanigans, but really, it's everything:

•  There's been a Facebook post going around for years that claims Goodwill pays their CEO, Mark Curran, $2.3 million/year. It's simply not true. Their CEO is Jim Gibbons, he makes a fraction of that, and Charity Watch gives Goodwill an A rating.

•  A guy on Twitter claims to be actor, stuntman and "Hollywood Bad Boy" Stephen Oliver. Mr. Oliver died in 2008. I busted him for this, and he responded by blocking me. Aside from wondering why anyone would impersonate such a little-known actor, I wonder about the real Mr. Oliver's family and friends. Does he have their permission to spout opinions under this guise?

I didn't say more about 4 and 5 because they are obvious and, well, why waste time explaining why it's bad to waste time online?