Our nation turns its lonely eyes to you

I know, I know. My Facebook feed includes progressives. I'm aware that John McCain is a popular punching bag. He's grumpy. He has exhibited a bad temper. But let's be real: his biggest sin is that he is (gasp!) a Republican. That somehow makes it acceptable to compare him to a psychopathic killer from The Sopranos, hence his unfortunate "Johnny Walnuts" nickname. Or to characterize his cantankerous nature by referring to him as "Gran Torino," based on Clint Eastwood's 2008 role as a perpetually angry "get off my lawn" neighbor.

I give these progressive their own special nickname. I call them "assholes." For, while I disagree with McCain on foreign policy and a woman's right to choose (and I'll be forever pissed at him for plaguing us with Sarah Palin),  I know he is a courageous man who has proven how much he loves this country. I'm not limiting this to his estimable service in Vietnam or his time as a POW. I include way he conducted himself throughout the 2008 campaign, with this exchange being the hallmark. The difference between John McCain and GOP's current standard bearer couldn't be more stark.

If the Congressional investigation into Trump's Russian ties is to continue, post-Comey, the effort has to have the vocal support of prominent Republicans. I wouldn't be surprised if Marco Rubio stepped up to the plate, but he's nowhere near enough.

Lindsey Graham has already spoken up, but he'll need help because he's considered a "Never Trumper."

The one we need to guide us through this waking nightmare is psycho "Johnny Walnuts." Loony ol' "Gran Torino."

I don't doubt he'll do it. I do doubt that progressives will fall over one another to thank him. Assholes.

It's had an impact on my mood

Prior to Tuesday night, the Cubs had lost 4 in a row.

No one on the team had especially distinguished himself in the series against the Yankees, nor in the first game (a blow out) against the Rockies.

Tonight we won. Once again, I am a happy gal. 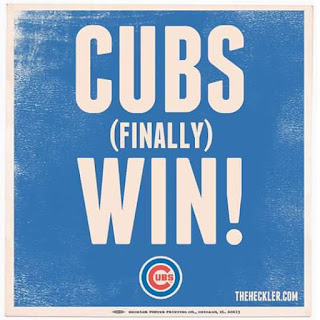