Things are going well for my Cubs this year. Very well. Right now, my heroes in blue are 30 games over .500. What a delightful but stunning turn of events for this ol' Gal, who has cheered them through seasons when merely reaching .500 seemed a worthy goal.

There is, however, something very weird going on that I want to read into the bloggy record, since I think in a few years it may be an interesting footnote in team history. 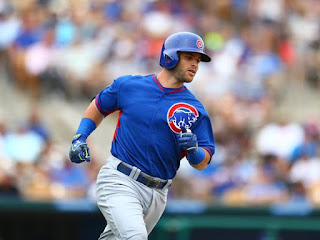 As in, "Whatever happened to Tommy La Stella?"

Tommy hasn't often started during this magical season, but he has contributed to the team's success. He's a dependable left hander, a good utility player and pinch hitter who was hitting .295.

But in late July, the Cubs had to send him down to the minors. It was merely a roster move, it happens all the time. The Cubs feel La Stella has enough talent and value to keep him in the organization, but for a variety of reasons just don't have room for him on their standard 25-player roster. But in September, when the play-offs start, the roster expands to 40 players. Obviously the Cubs want La Stella sharp and ready to join the team for the race to The World Series.

Tommy is 27 years old. Not a star, but someone who enjoys the cheers of more than 40,000 Wrigley Field faithful every time he steps to the plate. And he is a fan favorite because when he gets off the bench, he produces. He is on the cusp of being on the team when they make history. All he has to do is show up and play for a few weeks with the Cubs minor league team in Iowa.

So what does Tommy do? He goes home to New Jersey!

He's not injured. He has no sick relative to tend to. His house in New Jersey didn't burn down or anything. He just doesn't want to play in the minors ever again.

He's not talking to the Chicago press, but when ESPN reached him, he said he might retire.

This sounds batty to me, and I'm not alone. The Cubs have made the team psychiatrist available to him. The manager, wonderful Joe Maddon, has been remarkably measured in his public statements on the matter. Obviously the Cubs hold all the cards in this situation. La Stella is clearly in violation of his contract. We have so many good, young players in the minors we could just trade for a tried and tested major league leftie when the time comes to expand the roster.

I admire the Cubs' restraint and compassion in this matter. However it's resolved, La Stella will know his bosses gave him the time and space to decide what he wants to do with his life and career.

Today's happiness: sunshine on my face. I had a tough day at work today. Because my boss is a dick. (More on that some other time.)

It's just a few blocks from my office. Less than 10 minutes on foot. But the walk to and fro did the world for me. Sun on my face. Sun shining off the bus shelters. The sidewalks filled with rubbernecking tourists. It all made me happy. (The cheeseburger and beer helped, too.)
Each day in August you are to post about something that makes *you* happy. Pretty simple. And, it doesn't even have to be every day if you don't want it to be. It's a great way to remind ourselves that there are positive things going on in our lives, our communities, and the world.

The power of "thumbs up"

I decided last month that I needed to add more people into my life. Specifically, good girl friends. I believe I have two good candidates, Joanna and Nancy.

Truth to tell, I think I like Joanna better. But she has definite drawbacks, like I think she will soon be moving back to New Orleans. Then she'll be like Barb and the guys in Key West and my oldest friend: long distance.

Nancy is right here in my neighborhood. Nancy is smart and we're like minded. And Nancy almost always "likes" my Facebook posts. I don't have a lot of FB "friends" (just over 50), and with a small pool I don't expect everything I post to get a "like." Yet I notice that Nancy and I are so on the same page that she "likes" my stuff.

That matters to me.

Before the month ends, I've got to call Nancy and set up a playdate.

I fit into my Levis! I haven't been "dieting," per se. But I have been eating smarter and better. Last week, my friend John insisted I'd lost weight but I paid him no mind. This morning I was looking for a pair of jeans with a darker wash and slipped these on. They fit! Snug, to be sure, but still, I got 'em on.
Each day in August you are to post about something that makes *you* happy. Pretty simple. And, it doesn't even have to be every day if you don't want it to be. It's a great way to remind ourselves that there are positive things going on in our lives, our communities, and the world.