.... I'm forced to pay attention to the election. And I'm beyond ready for it to be over.

The big news since I last posted about the Presidential campaign is that Donald Trump has imploded. A "hot mic" tape of him talking about in vulgar terms about trying to seduce the married Nancy O'Dell (then of Access Hollywood) and then bragging about being able to grab women by their genitals and just start kissing them. It was appalling. The language he used was genuinely disgusting (even by my lights and, as this blog has often demonstrated, I have a salty tongue).

So much of what Donald Trump has said this past year has creeped me out that at first, I erroneously thought this was just another thing. (The communion wafer is "a little cracker," John McCain isn't really a war hero because he was captured, Megyn Kelly had "blood coming out of her wherever," mocking Serge Kovaleski for his neurological disease ...) All Trump really had to do was apologize, sound sincerely chastened, and move on. After all, Secretary Clinton is a very, very flawed candidate and there's a lot there for opposing side to seize on.

This was beyond Trump. He couldn't even fake contrition. Instead he apologized not for what he said but if we were offended, and dismissed his bad behavior as "locker room talk," and mere words. To emphasize that actions are worse than words, he had Juanita Broddrick, Paula Jones and Kathleen Willey as his guests at that evening's debate.

Yes, he forced Hillary to stand onstage in front of the women at the center of Bill's scandals.

It was a disgusting bully move by Trump, even worse than what he said. I'm no fan of Secretary Clinton, but I'm a woman who has been humiliated and has had my heart broken. It made me sympathize with her and hate him. He didn't have to do it.

And it was nah-nah-nah display. "Yeah, I'm bad but he's worse!" Our mothers wouldn't accept that kind of tattling and deflection if we broke a plate while doing the dinner dishes, yet we're supposed to embrace it when choosing a leader of the free world.

Then Anderson Cooper asked Trump if his predatory creepiness was limited to words. He defiantly insisted it was. So then the predictable happened. Women began coming out of the woodwork, telling tales of how Trump groped them.

He says this is proof of a conspiracy. "Crooked Hillary" and the "dishonest mainstream media" and international banking concerns. Yeah, right.

I believe it's obvious what happened: Women who Trump abused saw him on TV, giving credibility to the Clinton accusers and then diminishing what he did to them by dismissing it as "just words."

Meanwhile, Wikileaks dumped a ton of Hillary Clinton emails. No one is talking about them because Trump can't stop talking about himself. He keeps making news. Today I heard him tell a rally that one of the women accusing him had to be lying because "she wouldn't be my first choice." So she's not attractive enough for you to abuse, Mr. Trump?

None of this had to happen. Donald Trump made it happen.

I can't wait for this to be over. 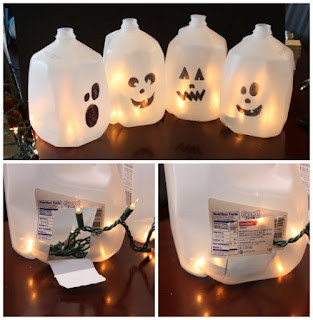 I have no interest in/talent for DIY. And yet when I saw these milk jug lanterns I was enchanted. What a happy way to use something one more time before it goes to the recycling bin!