Happy Birthday to Me

I spent this afternoon celebrating with Joanna at The Chriskindlemarket. Every year since 1996, this marketplace has been in the shadow of The Picasso. It was inspired by the holiday markets in Germany. Each stall is a food or gift vendor. It's very upbeat and festive.

I've walked by it every year but never went in. At 9:00, when I raced past en route to the office, they weren't open yet. At lunchtime it was too crowded. Somehow, in the evenings, there just wasn't time.

Well, this year we strolled it. With me retired and Joanna self-employed, we could take our time. It was great! I got handcrafted little gifties for my niece and her hubs (natural honey for her, beard moisturizer for him). 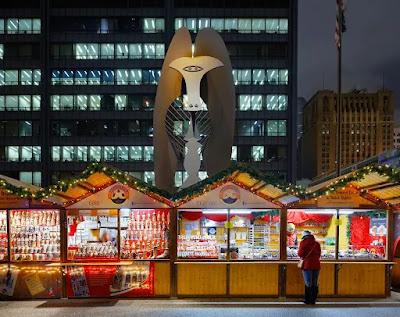 Then Joanna took me for a sandwich and root beer and we caught up.

It was a good birthday. I have a couple gifts in my den -- one from my aunt, the other from my cousin -- but I'm waiting until Wednesday to open them. I want to spread the happy a little longer.

My weekend with Mr. Lincoln

... and Elaine from my movie group.

We drove to Springfield on Friday afternoon. I had wanted to go down on Amtrak. It takes longer, but it would be no wear/tear on her car, we could get up and walk around, and I could go to the bathroom whenever required. But Elaine believed driving would give us "more freedom." Oh, you car people! I just don't get you. I would have preferred drinking plenty of water and giving my bad back a break. But she loves her car.

We had dinner at a nice local Italian restaurant and then checked into our rooms at the President Abraham Lincoln Hotel. Yes, everything in Springfield is named for our favorite son. My room had two portraits of Mary on the walls and TCM on the satellite streaming service, so I was happy. Elaine had her own room, and I think that worked better for us. I live alone and, after hours together in the car and over dinner, I needed alone time.

After breakfast we toured the Lincoln family home. This is the only house Mr. Lincoln ever owned, where he hoped to return after the Presidency. I can't count how many times I've been through here, and it never fails to move me. A real family lived here. That rectangular thing on the table is the boys' actual stereoscope, a 19th century View Master.

Then we went to the Old State Capitol. Three presidents made history here. Lincoln served here in the House of Representatives, gave his eloquent "house divided against itself speech here, and this is where he lie in state. Barack Obama announced his candidacy for the Presidency here, and then returned a year later and introduced Joe Biden as his running mate. 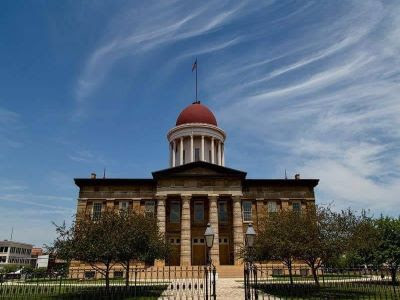 We finished the day at the Presidential Museum. Because we were here on November 19, we got to see a special display of The Gettysburg Address, in Lincoln's own hand.

We had dinner at the Globe Tavern. Abe and Mary lived at the original Globe Tavern after their wedding, so it seemed fitting.

Before we hit the road on Sunday, we said farewell at Lincoln's tomb. 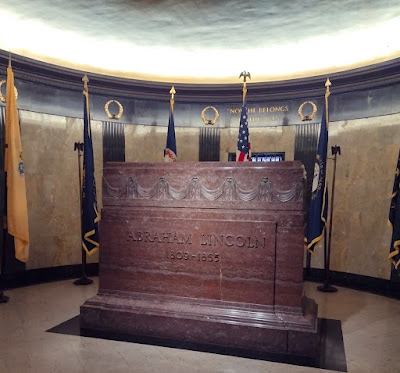 Elaine has lived here in Illinois for 60 years, and has never visited these sites. I was happy to introduce her around and be her tour guide. We also got to know each other better, which was nice.