My poor Charlotte was not that enthusiastic about breakfast this morning, even though I augmented it with her beloved Gerber baby food. She also passed on two of her favorite morning rituals -- sitting beside me as I slather moisturizer on my legs and leaping into the armoire when I remove a shirt.

Still, she did eat, her eyes do follow me around the room and she's not hiding from Joey and Reynaldo. So she's not feeling as poorly as she did in February, when she was dangerously thin and dehydrated.

I wish she could just tell me what's up. I'll bundle her up and take her to the vet this weekend, if that's warranted. But she so hates going. Leaving the house, traveling by car, being handled by strangers ... it's such an anathema that it feels abusive to do it for my peace of mind, rather than her well being.

And they say crime doesn't pay! 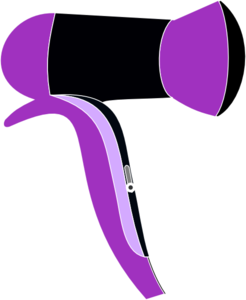 My blow dryer died Tuesday morning. At first I was pissed, and then I remembered that I've had it since George HW Bush was in office. I had spent five years working for a haircare company, writing the product packaging copy, and after I gave notice I began "liberating" as much product as I could.

I was a regular Artful Dodger. We actually needed a dolly to get the cartons of shampoo bottles out to the car! (And yes, I was that brazen. Building security looked the other way because they loved me ever since I had to work on Super Bowl Sunday and brought them the portable TV from our office.)

I feel like there should be a downside to this story, since I did steal. But there isn't one.