Pity the Wheelers of Revolutionary Road 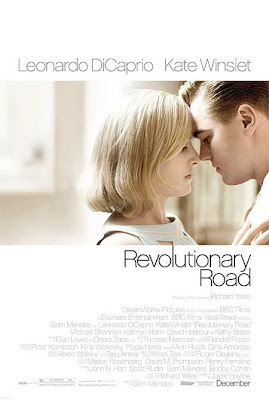 I loved this movie, though I may never see it again. Which is unusual for me, since I often re-rewatch films so many times that I can recite chunks of dialog from the ones I love, especially love stories.*

But this one rocked me because I "got" April Wheeler so completely that I ached for her. The couple's fights rang so true they made me very sad. And the end hit me almost like a physical blow -- even though I saw it coming, I wasn't prepared for how terrible it would make me feel.

I wish the relationship they had with their kids had been fleshed out a little more. That would have helped explain the characters a bit more and added to the poignancy, but that's a small quibble with a movie that's very well acted and very well done.

If you go see Revolutionary Road expecting to see the stars reprise the doomed but perfect love Jack and Rose shared in Titanic, you will be disappointed. The Wheelers are, in their own way, just as doomed, but their love is complicated, messy and far from perfect.

*"I'm no good at being noble, but it doesn't take much to see that the problems of three little people don't amount to a hill of beans in this crazy world. Someday you'll understand that. Here's looking at you, kid."
Posted by The Gal Herself at 1/24/2009 08:21:00 PM 1 comment:

Boys will be boys

For the first time in more than a year, I spent more than just a few minutes talking to one of my favorite people. He got married recently, and he's just now settling back into his old routine -- after the wedding, honeymoon, and holidays.

I completely adore my buddy. I met him more than a dozen years ago, when he first moved to Chicago from St. Louis, and liked him instantly. He had a lust for life … and girls, beer and sports -- exactly as I expected. He was (and is) also sweet, positive and genuine -- not at all what I expected from such a big, muscular kid. About 15 years my junior, I mentored him at work and was his confessor regarding adventures outside the office. It's been a joy to see the man he's become.

I could give you many examples of how thoughtful he is, but here's my favorite: About 5 years ago, I was hospitalized briefly for a painful but not serious malady of the feminine nature. After I was released, I had to stay in bed for a couple days. The pain meds messed up my vision and I couldn't read, I couldn't go online ... I was so bored! He called me from work and watched Cub games with me over the phone. That's my boy. 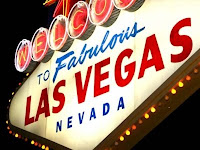 But this is also my boy -- he regaled me with tales of lap dances and strippers and hula girls at his Las Vegas bachelor party. He knows I'm not a prude and that I'll love him no matter what, but boy! I accept that this sort of thing goes on all the time and I'm not judging him, but it does startle me to hear.

He also told me how seriously he takes his role as stepfather to his bride's 7th grade son. He worries about classmates that have too much freedom and too little supervision after school. He told me how much more he appreciates his own parents today for the values they instilled in him, and how he hopes he can use their example as his lives up to his responsibility to his stepson.

I'm glad he's settled and happy. He's glad that now that his life is more routine again, we'll be able to see each other more often. I'm glad, too. I want to be around to watch this new chapter of his life unfold.