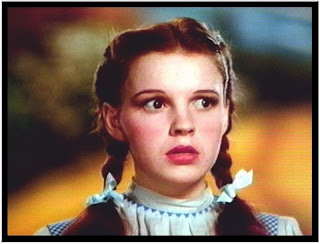 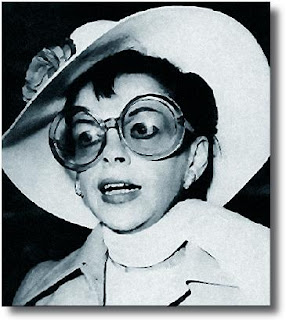 I'm revisiting/revising a TT I did way back in 2008, because Judy Garland has been popping into my head a lot lately. I saw a photo of her taken near the end of her life and was shocked to realize that, when this was snapped, she was only 47. How did the Dorothy that we all know and love end up sick, old and dead before her time? I also did a "Fashion in Film Blogathon" post about Valley of the Dolls, one of the most delightfully wretched movies ever made. Garland's behavior had become so erratic by then that she was fired. How does a star of her magnitude find herself dismissed from that piece of crap?

This TT follows her life and career, taking us through the decades of divorces and drinking and drugging and smoking and suicide attempts ... as well as remembering the authentic, ferocious talent that makes her indelible. No less an expert on these things than Katharine Hepburn once declared that Judy was one of the most gifted individuals she'd ever met. Kids not even born yet will watch The Wizard of Oz and follow that yellow brick road with her. To borrow from Arthur Miller, attention must be paid.

1. She was a major star in MGM’s Golden Era. She made more than 25 films for the studio in just 14 years. She was still in her 20s when they fired her after too many sick days, late days, days when she wouldn’t/couldn’t leave her dressing room at all. After all, it’s called show BUSINESS, and Garland no longer was a good ROI.

2. In her MGM heyday, she was awarded a special Oscar. Unlike Haley Joel Osment and Abigail Breslin, among others, child stars in those days simply weren’t nominated for “competitive” Academy Awards. Instead they were given mini Oscars. Garland received hers in 1940 for her “Mickey-Judy” musicals and for the immortal Wizard of Oz.

4. She put her indelible mark on classic songs in those silly movies. I Cried for You, I’m Nobody’s Baby, How About You, and But Not for Me. Once Judy sang these songs in her strong yet tremulous voice, they should have just been retired.

5. Her version of You Made Me Love You was initially an MGM novelty song. In Broadway Melody of 1938, a teen Judy sings this to a photo of MGM’s greatest star as she pens him a fan letter. It begins, “Dear Mr. Gable, I am writing this to you …” She sings with such aching sincerity, it could have been me warbling to Bobby Sherman or David Cassidy. 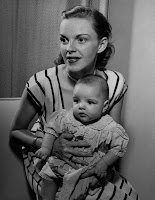 6. She worked with Vincente Minnelli on Meet Me in St. Louis. Together they created famous musical numbers like The Trolley Song and Have Yourself a Merry Little Christmas. They later married and created Liza.

7. She helped launch Gene Kelley’s film career. He was a critically acclaimed Broadway performer, and Judy lobbied for him to be her costar love interest in his film debut: For Me and My Gal.

8. They also appeared together in my favorite Garland film, Summer Stock. It’s kinda dopey, actually. A Mickey-Judy/”Let’s do the show right here” musical with an adult cast. But it’s got great songs like If You Feel Like Singing, Sing! and the unforgettable Get Happy! Love her in that fedora. 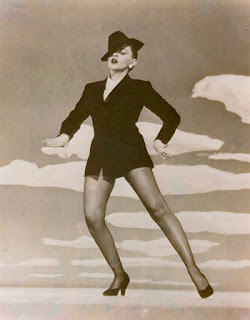 9. The backstory makes that number even more interesting. Throughout the movie, Judy is … well … fat. It works for the story because she’s cast as the diligent sister who works the family farm and supports the glamorous, frivolous sister with show biz aspirations. Suddenly, in the iconic Get Happy! number, she’s sleek and svelte. Then, for the remainder of the film, she’s heavy again. As the story goes, after the film was shot, Garland was hospitalized for a time (there were definitely pills, most certainly booze and perhaps a suicide attempt involved) and during her convalescence she lost a ton of weight. While she was trying to get well and clean, MGM was editing Summer Stock and decided it needed another big number. So when Judy left the hospital, she was summoned back to the set to shoot Get Happy! It was the last number she successfully completed at the old Dream Factory.

10. After she left MGM, she began performing on stage. She needed money. She had fame, but no job. Instead of doing plays, she developed a one-woman musical show. It’s still available today as a 2-CD set, “Judy at Carnegie Hall.” If you’re curious to hear what all the fuss is about, take a listen.

11. Then there’s A Star Is Born. She acts, really acts, in this one. “Hi, everybody. This is Mrs. Norman Maine.” Gulp. Oh yeah, she sings, too. Most notably Swanee and The Man that Got Away. She was nominated for an Oscar for this performance. Groucho Marx referred to her loss that year as “the greatest robbery since Brink’s.”

13. Her variety show on CBS featured some amazing duets. It didn’t last very long because the network couldn’t sustain high production costs (due to their star’s late days, sick days, etc.) and middling ratings. But the series gave us Judy singing with Liza, Peggy Lee, Lena Horne and best of all, an unbelievably young Streisand. Their duet of Happy Days Are Here Again and Get Happy! still leaves me with goosebumps. Streisand, barely out of her teens and at the beginning of her career, looks stronger and more self possessed than Judy, who keeps touching Babs as they sing. The veteran looks like she's getting support from the rookie. Watching this, you're not surprised that Streisand is the one who never went to rehab, or was multi-married, or went bankrupt. (BTW, on April 24, survivor Streisand celebrated her 71st birthday.)

Ok, so I left out most of the really lurid stuff. If you want to read about the sex and the drugs, there are plenty of biographies out there. Some are harrowing, some are really juicy, and all are entertaining. Even when Garland was at her worst, she was imaginative , funny and rather brave, so her life has attracted successful biographers like Gerald Frank and Anne Edwards. But her chaotic and self-destructive personal life can’t overwhelm her sumptuous body of work.

For more about the Thursday 13,

I want to always be this busy! Things have really been humming around here lately. Makes the days just zip by.