My friend Chuck just posted this on Facebook. Chuck is nice but full of shit. 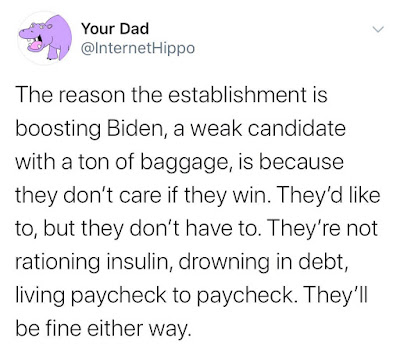 Oh yeah, and Susan Rice endorsed Biden. Susan Rice is one of Barack Obama's closest surrogates. That's the nearest to a thumbs up from Barack Obama that anyone is going to get before the convention.

So when people like Chuck -- who is a Warren supporter -- post stuff like this they are acting like Bernie Bros did in 2016. Remember how Sanders supporters insisted Hillary only became the candidate because of her "oligarchs" and all that fossil fuel funding -- thereby completely discounting the decades long relationship Bill Clinton had with the Black community? Remember that appalling display -- in prime time and on national TV -- when Sanders supporters literally fucking booed the African American speakers who supported Hillary at the convention? Yes, they booed the late Elijah Cummings, Stephanie Rawlings-Blake and Cory Booker, just because they supported HRC.

Remember how many Black voters responded by feeling that there's no place for them in the party and so they stayed home -- and Donald Trump was elected?

It hurts when your candidate loses. I know. I worked crazy hard for John Kerry in 2004. I still carry the scars.

But maybe, instead of lashing out and looking for conspiracies, left wing progressives ought to look at themselves. Maybe the problem is their messengers and not oligarchs or The Establishment. Their message isn't resonating with Blacks (and suburban voters of all colors). Sanders has had great success with Latino voters this time around. Similar efforts need to be made with Blacks.

Let me rephrase: it will not help their cause or the country.

It will help re-elect Donald Trump.