1) This week's artist, Elton John, was made an Office of Arts and Letters -- one of France's highest honors for people who have contributed significantly to the arts. What's the most recent compliment you received? The two other members of my condo board told me last night they didn't believe I was "anywhere near" as old as I say I am. I'd like to say it's because of my youthful, dewy appearance, but I suspect it's because of my casual use of profanity. Oh well, a compliment is a compliment and I accept it ... as graciously as shit, if I do say so myself.


2) In 2013, Elton had to cancel an international concert tour because he had an appendectomy. Do you still have your appendix? Yes.

3) In 1979, Elton John was the first Western rock star to tour the Soviet Union. Would you like to visit Russia? There are places I'm more eager to visit.


4) Elton and his mother hadn't spoken in years but he reached out to her and healed their beach in honor of her 90th birthday in 2015. Who is the oldest person you know? The neighbor at the end of the hallway is 90.


5) Flowers and plants are popular on Mother's Day. How is your yard or garden? Is it green and/or blooming? I don't have a much of a garden here, but I recently walked past my old apartment building and was heartened to see how green everything was. And then I got sad. One of the younger trees (maybe 20 years old?) is probably coming down soon. There's a shopping center going up in the lot next door and the poor tree is pretty close to where ground will broken. It left me melancholy to see it waving blithely in the breeze, unaware of its upcoming fate.


6) Mother's Day is a big holiday for card shops. So are birthdays, weddings, and St. Patrick's Day. Hallmark sells greetings for everything from "Congratulations on Your New Job" to "Happy Retirement." Who received the most recent card you bought? Our admin, for Administrative Professionals Day last month. 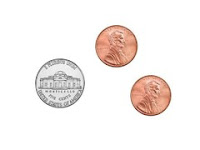 money by to reusing wrapping paper and gift bags. Tell us one way that you economize. Chicago now has a 7¢ bag tax. To avoid it, I've got a plastic bag in the bottom of my purse in all times.

9) RANDOM QUESTION: What size mattress do you sleep on -- twin, full, queen or king? Full. And I need to buy a new one. The one I have is ten years old and much the worse for wear.

ONEWORD: Struggling with My Focus

Yup, this photo just about sums it up. 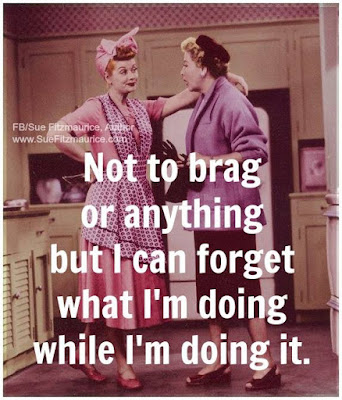 Chuck, an art director I once worked with, explains this away by saying we're creatives, and a creative's brain is like his or her desktop: we always have too many windows open at once.

OK, that's an explanation, but not an excuse. I have to concentrate on the task at hand and blot out the rest.

Which is why I've just moved that dermatologist bill (dated 4/11 -- GULP!) to my purse, which brings me one step closer to calling their office on Monday. They only billed me for one visit with one doctor, when I had two separate visits with two different doctors in the same practice. I want to know if the second bill is forthcoming and I'll pay them both together. But I imagine my lack of focus makes me appear to them like someone who doesn't intend to pay at all.