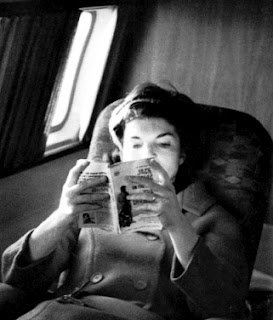 • What are you currently reading? Lennon Revealed by Larry Kane. It's a serious but still entertaining study of John's life, with a special emphasis on his last decade. Larry Kane is able to put the John's story in a context beyond music because he's not an entertainment writer. He's a journalist who covered political conventions and the crime beat as well as, by sheer luck, the Beatles' invasion of America in 1964. I recommend this one.

• What did you recently finish reading? My Week with Marilyn by Colin Clark. You know that old saw that the book is always better than the movie? I always counter that with The Godfather, a masterpiece of a movie based on a rather lurid book. Now I have another example. For the movie, starring Michelle Williams, is charming and far more lively and believable than these snarky, self-important memoirs.

• What do you think you’ll read next? Five Days at Memorial about the Memorial Medical Center in New Orleans and how they coped during the crisis of Katrina.