I love First Ladies. It's such a high-profile role but it comes with no job description. Everything Mrs. President does is scrutinized and discussed and lauded or criticized beyond its actual value. The way each lady handles the job, the fame, the criticism and the impact it has on her family is like a Rorschach Test.

I'm currently reading The Lincolns by Daniel Mark Epstein and I'm stricken by all the similarities between Mary Lincoln and Jacqueline Kennedy. I'm not talking about those silly Lincoln/Kennedy coincidences that maudlin conspiracy theorists loved quoting in the 1960s. (Lincoln was shot at Ford's theater, and Kennedy was shot in a Lincoln, which made by FORD! Get it?) These reveal a bit more about the ladies involved.

TEN SIMILARITIES BETWEEN MARY LINCOLN
AND JACQUELINE KENNEDY
1) Both women were "daddy's girls." Mary adored Robert Todd and insisted she was his favorite daughter. Jackie's relationship "Black Jack" Bouvier explains her tendency to fall for dashing but emotionally remote men.

2) Both had a difficult time adjusting to life as stepchildren. Mary's mother died when she was just six, and her father soon after remarried, leaving Mary to forever feel slighted in her own home by her stepmother -- a woman Mary believed favored her natural children. Jackie's parents divorced when she 11, and her mother remarried two years later. Jackie found herself one of a household filled with children -- sister Lee, two step-siblings and two much-younger half-siblings.

3) They gave their husbands a touch of class. The Todds of Kentucky lived in a 14-room mansion in Lexington -- a far cry from the log cabin Abraham Lincoln made famous. The Bouviers were first listed in the Social Register in the 19th century, whereas the Kennedy family was rejected by Boston Brahmin culture.

4) Mary and Jackie were fluent in French. While both Abe and JFK were gifted communicators, they both struggled with foreign tongues.

5) Each woman had lost a child before entering the White House. Eddie Lincoln died before his fourth birthday in 1850. Arabella Kennedy was stillborn in 1956.

6) Each woman lost a child as First Lady. Willie Lincoln actually died in The White House when he was 11. Patrick Kennedy never came home from the hospital; he lived for only two days in Summer, 1963.

7) They both set out to beautify the White House. Mary was roundly criticized for spending too much on curtains, furniture and rugs while the country was at war. Jackie's efforts met with greater success because her goal was to restore "The Peoples' House," plus she financed any overages by selling White House souvenir books, not with taxpayer money.

8) Jackie and Mary cured their blues with retail therapy. Neither JFK nor Abe cared for this coping mechanism.

9) Both women were with their husbands when they were shot. Each was eventually buried beside him. 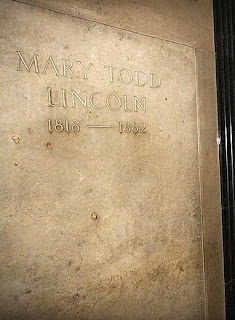 10) As widows, they both abandoned Washington, DC. Mary returned to Illinois, living in Chicago and Batavia (where she was institutionalized for a time) before dying in her sister's home in Springfield, the town where she enjoyed the greatest happiness with her husband. She was 63. Jackie's primary residence, even during the years she was married to Greek shipping magnate Aristotle Onassis, was in New York. She died in her apartment at 1040 Park Avenue in 1994 at age 64.

Considering these women, I am amazed again by JBKO's remarkable fortitude. (Somehow "balls" doesn't seem appropriate when describing a First Lady.) For example, both women were banished from their husband's deathbeds. Mary was crowded out of the tiny bedroom in the private home across the street from Ford's Theater when her husband's Secretary of War shouted, "Get that woman out of here!" Mary allowed herself to be relegated to the parlor while men attended her husband as he moved from life to history. Everyone in that room knew Lincoln was beyond saving. Why did they have to treat poor Mary so cruelly?

In Dallas, the staff at Parkland Hospital treated the most famous patient they would ever have as a homicide victim. With concerns about evidence, protocol was strictly observed, which meant no non-essential personnel in the trauma room. Once it was obvious the President was dying, a priest was summoned. Hearing this, Jackie got off the folding chair where she was waiting for news and attempted to enter Trauma Room One. Nurse Doris Nelson refused her entrance, offering her a sedative instead. The very determined First Lady assured Nurse Nolan, "I'm going 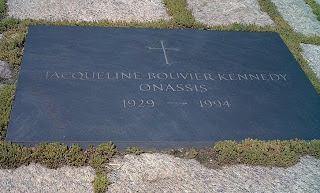 to be with him when he dies" and tried to physically shove the nurse aside. The attending physician came over and told Nurse Nelson to bend the rules this once, saying, "It's her right."

Obviously life handed each woman more than her share of adversity. I believe it was an exceptionally steely spine and resolve that makes Jackie seem like a triumphant survivor while Mary is a tragic victim.
Posted by The Gal Herself at 3/08/2011 04:23:00 PM 2 comments: