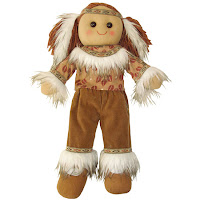 What's the favorite gift you ever gave? An American Indian rag doll, similar to this one. I rescued her from a bin at the local grocery store, and she cost me less than $10. I donated her to a toy drive, so I have no idea where she ultimately ended up. This happened years ago (during the Disney Pocahontas craze), yet somehow this little doll has stayed with me. When I think of her looking somehow forlorn in that wire barrel at the grocery store, I have often hoped that both she and the girl who received her found happiness together.
Posted by The Gal Herself at 12/18/2010 08:12:00 AM No comments: