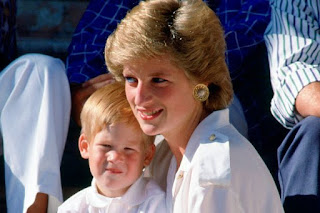 I was moved by Prince Harry's interview with Oprah. Meghan struck me as disingenuous, but Harry seemed to be suffering confusion and pain. I wanted to give him a hug.

I posted this photo on Facebook and wrote: Last night, watching Harry and Meghan, I kept thinking of what Carrie Fisher said about relationships: "They're never really over, just over there." It felt like Harry is fighting extra hard for Meghan because he felt no one fought for Diana.

That was when my aunt weighed in. "As Bethany Frankel said, 'oh, boo hoo.'"

She went on to share some factually inaccurate information about Harry's finances which just emphasized that she hadn't watched the show she was commenting on, and continued to lecture me in an aggressive way.

Um ... it's MY Facebook page. She has her own page for her own opinions. I don't scroll through her Fox-filled feed and "correct" her. (I don't even follow her anymore.) I don't know why I'm not entitled to the same respect.

I didn't engage her anymore. She's my auntie, she's 74 and I don't want to fight. I also didn't want my friends correcting her misinformation, so I "hid" her comments.

But it made me sad. She has a strained relationship with her oldest son because of comments she made in 2016 that were, in his words, "racist and homophobic." I didn't ask what she said exactly because I don't want to know. Some things can't be unheard. Her adult grandchildren were disillusioned when their heretofore sweet, supportive grandmother came out loud and proud for Trump and gave her reasons, which they too felt fell into the "racist and homophobic" category.

She went to her granddaughter-in-law's Zoom baby shower and commented ruefully that "no one noticed" she was there. Of course not. In every conversation, she manages to work in her anger and grievance. It's tiresome and sad and more and more of her relatives are avoiding her. (Example: nothing I said in my original post about Harry had anything to do with his finances. It was about the nature of grief. Does my aunt really think that money can buy you out of such pain? Of course not. So why voice her opinion so provocatively?) She is hurt and confused by her isolation, but seemingly can't stop herself.

We've been here before, she and I. I'm made of sterner stuff than my cousin or his kids and refuse to let her go. I will no allow Donald Trump and Fox News ruin what time we have left together. And yes, I do blame Trump. From "lock her up" to "enemies of the people," our then-President amped up the antagonism with his overheated tweets and made demonization comfortable.

So I'm going to ignore what she says on social media and send her a chatty email this week, about books I've read and about how my Reynaldo is adjusting to his meds. I'm going to pretend that she didn't use my own Facebook page to lecture me and spread falsehoods. I'm going to insist on sending love her way.

Because I know she loves me.