Not my office, but it could be 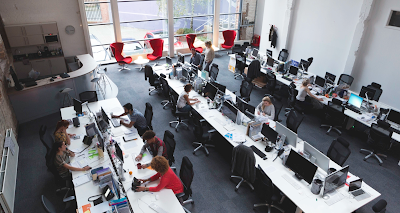 Look at this picture. Imagine this setting when everyone is at their assigned seat. There can be no "social distancing." Everyone is closer than six feet to the person to their left and right, as well as directly across from them.

For this reason, when we begin returning to work after the pandemic, we are likely to do it by teams. If your client is Global Airlines, you're expected to be at the office on Mondays. The Jiffy Burger team will be there on Tuesdays. The Consolidated Insurance team will be onsite on Wednesdays ... We'll sit as far apart as possible, and wipe down our areas throughout the day.

I read in Business Insider that more than half of us believe that open offices will lead to an increase in coronavirus infections. I'm one of that 52.9%.

Of course, I hated open seating before this. It robs me of my privacy and the quiet time I need to write. It leaves me piteously exposed all day and exhausted at night.

And now it puts me at risk for disease.

If it wasn't for the stock market's nose dive, I'd welcome retirement. 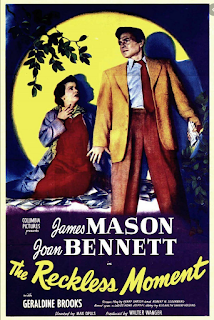 Our classic movie group met last night via Zoom.  It got off to a rocky start, as these meetings always do. But once we all got into it -- both technologically and emotionally -- it was fun.

We each watched the movie on our own. Will chose The Reckless Moment, a 1949 noir* starring Joan Bennett and an impossibly handsome young James Mason. I enjoyed it well enough. It reminded me of Mildred Pierce (bad daughter) with a dash of Hitchcock (lots of MacGuffins†).

I attended the Zoom meet up with one cat or the other on my lap, which was nice. A pair of millennials joined us, and it's always fun to talk classics with a new generation of fans. These two really knew their shit.

We had a newish member, a rather pretentious woman who kept reminding us that she's a playwright. She insisted that the movie reflected the tough times the middle class suffered as it came out of the Depression. Um ... no .... Joan Bennett's character had a beach front home with an adjacent beach house, both a car and a boat, a live-in maid, and a mink which she wore not on special occasions but every time she left the house. Even after this was pointed out to her, the playwright kept reminding us that this movie depicted how hard it was to be a middle class woman in 1949. She knows, she's a playwright, after all. I mention this because I forgot myself and allowed the camera to catch my eye rolls. That was unkind of me. Gotta remember that for our next meeting.

But in all, I had a great time. I think our moderator, Will, enjoyed it, too. I'm especially happy for him. This is the first April in a decade that he won't be at the TCM Classic Film Festival. I hope last night's coming together took some of the sting out of this for him.

*Or was it a melodrama? I find classification conversations tiresome, but I know classic movie aficionados who love them.

†Hitchcock describes a MacGuffin as something that the characters worry about and discuss but, in the final analysis, had nothing to do with the way the plot unfolded. In Psycho, it's the money Marian stole. I love MacGuffins, because I fall for the trick and am distracted by them every time. They're a delicious reminder that I'm not so smart after all.
Posted by The Gal Herself at 4/09/2020 08:59:00 AM 1 comment: