1) Jimmy Buffett is singing about his bandmates watching hockey in a sports bar. Since it's Super Bowl weekend, our first question is: In cold weather, which sport to you watch most: football, hockey, or basketball? I haven't watched a full game of any of those sports.

2) Jimmy sings it's just 20º outside. How high will the mercury reach where you are today? Jimmy is close! It hit 22º on Friday! Today is supposed to be a little warmer.

3) "Boat drinks" are mixed drinks designed to enhance the enjoyment of a boat ride or time on the beach. Popular boat drinks include The Tequila Sunrise, Cuba Libre, and Mimosa. When did you last sip an alcoholic beverage? Was it a boat drink? Friday afternoon, I had a beer. Not even a Corona with lime, just a plain old Miller Lite.

4) Jimmy met his wife, Jane, in Key West at a bar called The Chart Room. Have you ever been to Key West? Every year for decades. I used to go down for New Year's, but since my mom passed away, I've been spending Christmas with my old friends Henry and Reg.


5) Have you ever met anyone worth knowing at a bar? No.

6) While Keith Richard and Paul McCartney have made cameo appearances in the Pirates of the Caribbean movies, Jimmy Buffet has not. Producers have asked him, but he's always had to decline because of his touring schedule. Have you seen any of the Pirates/Jack Sparrow movies? No. But here's a clip of his lordship as Jack Sparrow's jailer.


7) When Jimmy gave the commencement address at the University of Miami, he showed up in flip-flops. How many pairs of flip-flops do you own? I have lots of sandals, but no flip flops. I hate that between-the-toe thing.

8) Jimmy has his own station on Sirius Radio. Do you subscribe to Sirius? No.

9) Random question: What trend or fad from your youth do you hope never makes a comeback? Big floppy hats. Or anything else they're wearing. God, humans were an ugly race in the 1970s. 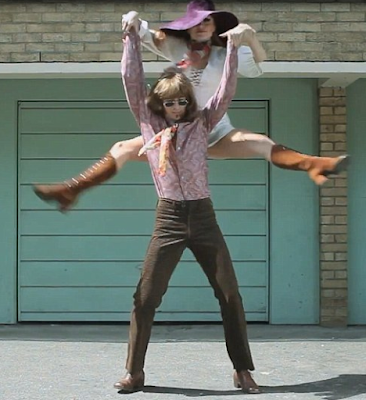 I continue to be surrounded by sad. I found out this morning that Will, the moderator of our movie group, lost his mother on Wednesday. Violet was 92 and had been in ill health recently, so this was not a shock. But that doesn't mean it doesn't hurt. I shared the news with Joanna, and she and I pitched in on a memorial donation to The Greater Chicago Food Depository.

This feels like just another thing. My boss was off today, and will be gone on Monday, because of ongoing problems with his son. Apparently the young man (27) is now in a homeless shelter. He refuses to either stay on his meds or not mix his meds with pot (I'm not sure which) and consequently physically threatened his mother. This caused my boss to throw his son out of the house. They have a family counseling session on Monday.

My art director is on the phone off and on all day, every day, with her siblings as they plan for their recently-deceased mother's memorial service and work through their father's new and inappropriate fondness for another woman.

It isn't that I don't think my boss and coworker aren't handling their travails well. It's that, with open seating, we sit on top of one another. The sadness can be oppressive.

I'm happy for the weekend.

She looks so old!

I had dinner this week with my friend Kathy. We were celebrating my November and her February birthdays. I got her an easel-back canvas print of her and her family visiting Millennium Park, and she got me the Hamilton Broadway soundtrack.

We're in regular contact, usually by Facebook and occasionally via email, but we haven't seen each other since fall. So I admit I was shocked by how she had changed in the last five months or so. She was wearing no make up and her skin was very lined. Could the change in her appearance be winter pallor? Or has this winter been especially hard on her? She's had a lot going on in her ever-chaotic life and has found herself needing to find a new home. We didn't speak specifically about her ongoing money problems (because we were celebrating) but as part of the conversation about her apartment hunting, she mentioned that she made $10,000 last year. She also complained that she can't see well at night anymore, and that worries her in terms of her driving. She's also very forgetful. Her age and frailty made me sad.

I mentioned that my new Ventra card expires in December 2022 -- when I'll be 65 -- and joked that my own expiration date might be sooner. But it did wash over me that we're all old. Kathy is oldest, true, by about 10 years. But John will be 63 in July. Both John and Kathy have diabetes, and John has heart trouble, to boot. My oldest friend, aged 61, battles depression and arthritis and heart trouble and pre-diabetes and dental problems (which can be a gateway to so many other problems).

This all leaves me melancholy.

On the bright side, the manicotti was exquisite. It's always fabulous at La Cantina. Their minestrone is also always awesome. It's one of three restaurants under the same roof called The Italian Village. If you're ever in Chicago, you must dine here. This is a foodie town, and chic restaurants come and go. But Italian Village and La Cantina are dependably old-school Italian and reliably fantabulous.* And so affordable! Because Hamilton is playing right across the street, it's hard to get in between 5:30 and 6:30. But other than that, you can generally wander in without a reservation. Go, go, go. (And have the manicotti.)

By the way, our waitress saw the packages and realized we were celebrating birthdays, so she brought us a big piece of rum cake with a candle. But even better than the free dessert, was her presentation. She was very young and had a very thick accent (I couldn't identify the accent.) She came over singing "Happy Birthday." She changed the lyric, "Happy Birthday, Miss Americas, Happy Birthday to Youse." So cute!

*I'm not so sold on the third restaurant, Vivere.