PREFACE: Bill Clinton's impeachment scandal broke my heart. As a woman, I was offended by the predatory nature of his conquest (though I don't think we can hardly deem that poor, emotionally needy intern much of a "conquest") and I hate, HATE that he has gone on to be one of the most recognized and beloved figures on the planet while her name remains a punchline. As a Clintonista, a campaign worker who gave of my time and money and heart, I felt very personally betrayed. That, Mr. President, is most emphatically not what I wanted you to do in The Oval Office.

There is no comparison between Bill Clinton and Anthony Weiner. None. Zero. Zip. 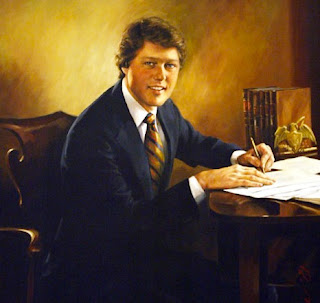 •  Been a Rhodes Scholar (no small accomplishment for a boy who grew up in Hot Springs, AR)
•  Graduated with honors from Yale Law School
•  Served as AR attorney general, where he successfully faced down the utility companies on both rate increases and on environmental grounds
•  Been sworn in as governor at the age of just 32 (youngest in the country)
•  Reformed the state's public school funding, introduced banking reforms and attracted new jobs through support of the burgeoning technology sector (though, to be fair, AR still lagged behind the rest of the country in average income during Gov. Clinton's tenure)
•  Become the second youngest man ever elected President (only JFK was younger) 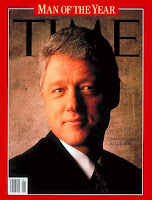 •  Championed and signed  the FMLA -- The Family and Medical Leave Act of 1993. Thanks to President Clinton, men and women are able to take unpaid leave to care for new babies, sick parents, and other qualifying medical and family issues without having to worry about job security.

This just brings us to the first term, when Clinton was the age "Carlos Danger" is today.

If Mr. Weiner had anything in common with 42 beyond the narcissistic belief that he has the license to do whatever wishes within the sexual realm, he wouldn't be dead in the water politically. Unfortunately, he doesn't have Clinton's gifts of persuasion and compromise, imagination and vision, to make the uglier aspects of his personality seem remotely worth the spectacle.

If past is prolog, then we have no reason to believe Anthony Weiner's future accomplishments will deserve comparison to President Clinton's, and it's time for him to give the voters of New York a break and just go away.