Today's Happiness: Eating like a child. I had pizza for lunch and peanut and jelly, with a side of apple sauce, for dinner. 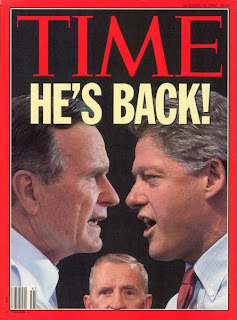 Let me state this plainly up front, I love The Big Dog, Bill Clinton. Yes, I know what he is, but I love him anyway. I'm proud that I worked on his campaigns (twice), voted for him (twice) and believe our world is a better place for him being in it.

That said, I'm amazed by how easily people forget recent history. On Morning Joe I'm watching a learned panel that includes Jon Meacham (!), a historian and veteran newsman who certainly should know better, discuss parallels between the 1992 and 2012 Presidential elections.

Bill Clinton, God bless him, didn't win that election. Ross Perot stole it for him. It was Clinton 43%, Bush 37% and Perot 19%. Anyone who voted for Perot would have preferred to be covered in honey and dropped in an ant hill than vote for that Liberal pot-smoking draft-dodger.

And unless Mayor Bloomberg becomes so disgusted by all the gun violence he enters the race as a third party candidate, I predict President Obama wins in November. The incumbent simply always has his thumb on the scale.

A certain member of the House of Representatives from MN believes Congress should investigate whether Huma Abedin, a top aide to Sec. of State Clinton, has ties to the Muslim Brotherhood. Since Hillary Clinton has never seemed like a woman unsophisticated and easy to dupe or overly vulnerable to outside influence, I think it's pretty easy to see what this is about.

Gabby Douglas, one of the bright spots of our Olympics, has been attacked for her "pulled back" hair and her pink outfit. By Americans. Who watch a certain news channel. Apparently this 16 year old girl is guilty of a "kind of soft anti-American feeling" because she wanted to be pretty in pink instead of red, white and blue. This soft little anti-American is black.

There was a shooting at a Sikh Temple in Wisconsin. These people were targeted by a Neo-Nazi crazy while in their house of worship. Six are dead.

I am haunted by wondering how much of this drip, drip, drip of hate -- this labeling some of us as "other," as dangerous, as less than us -- is corroding the psyches of those who hear it. It's disturbing to wonder how many feel it's "patriotic" to "take back this country" at gunpoint because we shouldn't retreat, we should "reload."

My heart hurts. What's happening to my country? Who are my fellow citizens? 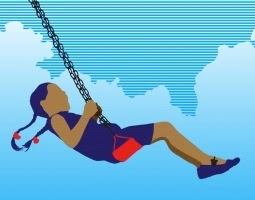 Today's Happiness is blue skies. It was so clear, so blue. Every time I looked at it, all day, wherever I was. As I was walking to the train this morning, it highlighted the green of the trees pressing against it. Then, when I got to the office, I had a hard time tearing my eyes away from the window, where I could see the metal and steel skyscrapers reaching up into it, and the Lake's own shade of blue bumping up against it. My heart felt a little fuller, every time I looked up today.