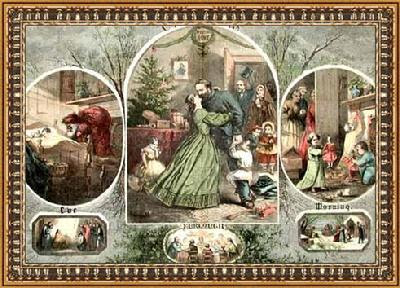 December 17: Post a picture of an old Christmas card
This one represents the style that was popular during the Civil War. Old enough fer ya?

I should go out more

I went out for dinner and Rumchata Coladas on Tuesday night with two long-ago coworkers. Bella used to be my admin, Maureen was one of our account execs. It was the first time the three of us were together since (gulp!) the summer of 2001!

I was surprised by how fondly they remembered me. Just between us, I never felt that close to them back in the day. Where we worked was, by and large, a happier workplace than the one I'm currently in. Also I was in management, so I felt a greater obligation to mingle. These are two women I've kept up with on Facebook, and even then it's been clicking "like" on photos and sending birthday wishes. I haven't spoken to or swapped emails with them ... and I haven't missed them. So naturally I hadn't expected to learn that I'd had such an impact on them. It was very flattering.

But Maureen is kinda weird. I have a healthy interest in sex and am no prude ... as evidenced by this shirtless and completely gratuitous photo of Jon Hamm. But Maureen leaves me in the dust. Even though she's married, she wanted to go to a steakhouse renowned for its "eye candy."* She told us how she's taken to sending "sexy selfies" to her husband. And she wanted to know if I'd slept with this or that former coworker. The one that especially surprised me was a much younger guy. He and I were very close, but of course it was platonic. I mentioned that I hadn't heard from him since his dad died a few years ago.

"Why did he contact you about that? Did you know his dad?" Maureen asked.

"No, but I wasn't surprised. That's the kind of thing we shared with each other."

"Did you two ever do it? You were always crazy close."

I just shook my head. She also wanted to know why I wasn't seeing anyone. It was like she wouldn't be happy unless I was mating on the floor in front of her. When I responded that, for now, my life feels quite complete, thank you very much, she backed off. And, I have to add, apologized profusely and graciously at evening's end. But either I'd never noticed, or had forgotten, her preoccupation with sex.

And Bella worried me. The sweetest woman you'd ever want to meet, she's going through a divorce right now. So she finds herself a single working mom with two kids ... and no health insurance. For whatever reason, her soon-to-be ex is not pitching in financially, and their house hasn't sold as quickly as they expected it to and now that it's Christmastime it certainly won't for a while. But none of this is why I'm worried. Bella is lovely, smart woman and I have all confidence in her.

It's her new bosses that concern me. She works for a tiny event planning firm. Besides her, there are three employees, and two of them are the owners. They are evangelicals and didn't hire her full-time -- and give her the benefits she needs for her children -- until she began praying with them every morning.

"It's perfectly legal, Gal, because this company is so small." I guess my face showed how appalled I was.

Bella was raised Roman Catholic, and there are aspects of her bosses' evangelical faith that don't jibe with her girlhood teachings. But, she said, "they wouldn't have brought me on full time unless they felt comfortable with me." And for them, comfortable means willing to pray with them.

It doesn't sound very Christian to me for employers to hold a working mother's health benefits hostage to her worshiping the way they do.

But, she doesn't feel like a victim, so I will try to get over my suspicions and discomfort and let it go.

*We didn't. I told her that I didn't have the money to spend on a cab  across town and a steak dinner. I shouldn't have resisted since Maureen ended up picking up the tab.