1. First thing you wash in the shower? My face. (Aveeno Ultra-Calming Foaming Cleanser)

2. What colour is your favourite hoodie? I don't own a hoodie.

3. Would you kiss the last person you kissed again? Sure.

4. Do you plan outfits? Not really

5. How are you feeling RIGHT now? Uncertain. Is my tummy going to be troublesome today? I don't know yet.

6. What’s the closest thing to you that's red? The light that says my phone is charged.

7. Tell me about the last dream you remember having? Earlier this week, I dreamed that my oldest friend's ex-husband, a man with anger management issues, was yelling at me. Really yelling at me. It was an unpleasant way to wake up.

9. What are you craving right now? Ice water. I shall have some when I'm done here.

11. What comes to mind when I say cabbage? Corned beef.

14. Do you bite into your ice cream or just lick it? Lick.

15. Do you like your hair? Usually. I do spend a great deal of time thinking about it.

Two sides to everything 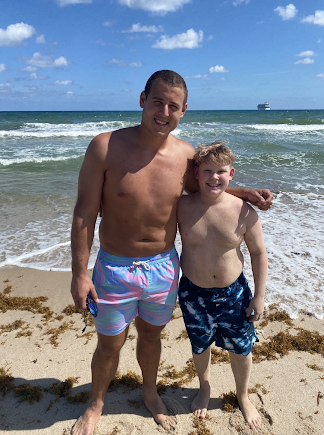 A Chicagoland mom tweeted out this Florida vacation photo of her son and my favorite-most Cub ballplayer, and Top 5 Human, Anthony Rizzo. She reports that while her family was at the beach, her son kept insisting that man looked an awful lot like Rizz, and she encouraged the boy to approach him.

While I am always happy to see Rizz' smile, and am impressed by the pastel trunks (his fashion game has improved with marriage; in his bachelor days, he was known as the only All-Star to shop at JC Penney), I know my own mother would NOT have approved of this encounter.

I clearly recall that day, decades and decades ago, when we found ourselves Christmas shopping at the toy store alongside Blackhawks great Stan Mikita. He was pushing a cart and trying to decide between Barbie items. My mother sternly warned me to, "Leave that poor man alone!"

She was teaching me that everyone -- even celebrities -- deserves privacy and space. After all, Anthony Rizzo was not at an event. He was enjoying a beach day after a long and emotional season. Isn't he entitled to be off the clock, at least once in a while? (Let's not forget, after the Yankees last game, his current contract was up and he's now technically just an unemployed Florida man.)

But look at the little boy's face. This clearly meant a great deal to him. I can see why a mother would want this moment for her son.

So who was right? My mom, who warned me to, "Leave that poor man alone!" or this mom, who told her son to go for it? I'm not sure.

Friday evening I got my third Pfizer in my right arm, and my annual flu shot in the left. I woke up feeling fine Saturday morning, just a little sore from the Pfizer, but after a couple hours I was exhausted. I took a nap, took a shower, farted around a little doing Saturday things, and found myself exhausted again.

I don't know if it was Pfizer #3 or getting it and the flu shot in tandem, but the fatigue was real and I'm very glad I gave myself a lazy Saturday to recover.

Of course, I'm glad I got the shots. I'm going to Key West to see Henry and Reg for Christmas, and they have reported to me that their little island is filled with trouble-making anti-mask tourists. I don't want to kick off 2022 sick! I'm just sharing so that you'll clear your calendar after your next shot. I'm so glad that I was able to give myself the time to sleep it off.