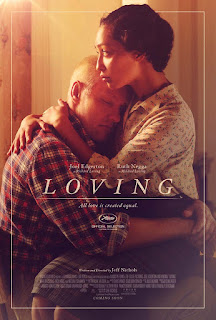 No gunplay. No explosions. No car crashes. While this movie has heroes, they do not possess super powers.

Loving is the story of Richard and Mildred Loving, the Virginia couple whose interracial marriage brought them to The Supreme Court.

They were in love. She was pregnant. He bought an acre of land to build his new family a house. They drove to Washington, DC, to get married.

Eight weeks later, they were arrested in their home -- dragged out of their bed in the middle of the night -- for violating "the racial integrity law." Because marriage rights were state's rights and Virginia didn't recognize their DC marriage license.

It took Robert Kennedy, the ACLU and the Supreme Court to make it legal for them to live in peace with their children under the same roof, anywhere they went.

I'm ashamed I didn't know more about this story before I saw the movie. It's an important chapter of recent history and the parallels to same-sex marriage are unmistakable. It should serve as a cautionary tale every time Trump refers to marriage as a "state issue."

As a movie, it's interesting. As I mentioned at the top, it's pretty quiet. It moves at its own pace. I appreciated the way the director used the soundtrack. Sometimes there was music but at other times it was quiet. Still. A sensitive and mature way to enhance the tension of these real-life events.

See it before all the Oscar nominations come out.