While I'm a longtime Clintonista, my loyalty only extends to Bill. Not Hillary. I wrote a post about why back when this campaign (really) started in 2014, and it's all still true. In a nutshell, I believe his weakness is sex and hers is money and I understand lust more than greed.

But damn if I'm not going to send her a contribution. Because once again, those who attack the Clintons are so over-the-top and unfair I must support her. It's been happening on the national stage for nearly 25 years, and it happened again this week. She testified again about the Benghazi raid, this time for eleven hours. It was grueling. It was ridiculous. And it was pointless. Even committee chairman Trey Gowdy admitted nothing new was learned.

Except that she is unflappable and in command and exhibits the qualities I want to see in a President when the pressure is on.

I'm not sure that's what the committee hoped to accomplish.

Back to real life

The Cubs lost four straight to the Mets. This magic season is over.

After the final game, once the victors hat left the field, these heartbroken yet gallant young (so very young!) men came out to applaud and tip their hats to the Wrigley Field faithful. I found it quite touching. 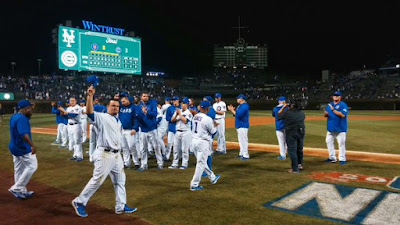 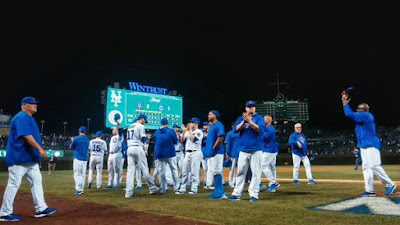 But now that it's over, I'm back to real life. I can't believe that I spent today mourning the Cubs and not monitoring the all-day Benghazi hearing! That's so not like me!

I wonder what else happened in the world when I was living with Playoff Fever.