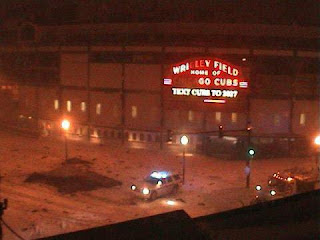 Here's something you don't see every day: the roof of Wrigley Field sitting in the snow. That square-ish thing on the left, on the ground beneath the streetlamp, is being referred to as "roofing materials." 55 mph winds will indeed do damage. The reason you only see a squad car and a firetruck is that Addison is now closed.

And so it begins 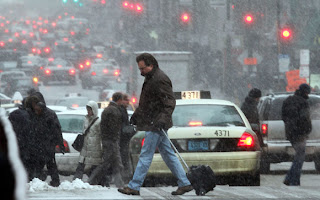 The blizzard they have been warning us about for days has arrived. I left work just before 3:00 and this is how it looked. Now that I'm safe and warm at home, all I can see out my window is white. It coming down so fast and so hard that I can barely see the sky. It's quite exciting!

They say it's snowing at a rate of 2" per hour, which makes it impossible for municipal workers to keep up with. We shouldn't be surprised if we have 2 feet of snow by morning, and with the wind, the drifts will be truly awe inspiring.

Trains are overcrowded. Highways are gridlocked. O'Hare and Midway are virtually closed until Thursday. 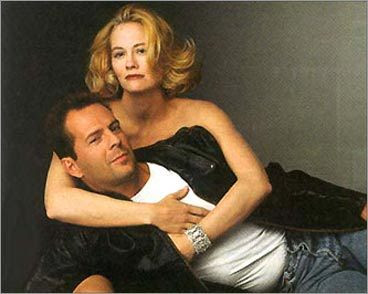 1) Dave and Maddie. Moonlighting. She was the cool blonde model, he was the hothead. She may have been his employer, but make no mistake about it -- no one was the boss of him. She gave him much-needed polish, he gave her much-needed fun. In addition to the undeniable sexual chemistry, we believe that each understood the other like no one else before.

2) Sam and Diane. Cheers. The same as Dave and Maddie, but different. Opposites still attract, and the sexual chemistry was just as palpable. But somehow, while they were undeniably drawn to each other, I never felt they liked one another. So ultimately, when they didn't make it together, I was more relieved than sad.

3) Olivia and Elliott. Law & Order: SVU. Elliott is a former marine, a cop's son, and a Catholic who loves and honors his family. So he probably never even lets himself acknowledge how much he loves his partner. But it shows when he talks about how good she is at her job, insists on what a good mother she would be (good cop + good mom = the highest praise Elliot could give). And Olivia, the fatherless daughter of an alcoholic mother, doesn't trust easily, but she trusts Elliott implicitly. Yet she would never admit to loving him -- it would be so inconvenient. So it could be the only two who don't acknowledge how much these two love one another are Olivia and Elliott.

and Grace. More than friends, less than lovers, but in love nevertheless. Each was his/her most authentic self with the other.

5) Mac and Sally. MacMillan and Wife. When I was in high school I didn't understand how the rumors about Rock Hudson could possibly be true. After all, he was the dashing, indulgent husband of young, wild Sally. He loved her and protected her and seemed to truly admire her funky, hippie ways.

6) Bob and Emily. The Bob Newhart Show. Most sitcom couples have kids. Not Bob and Emily. They were sophisticated, accomplished professionals (shrink and schoolteacher) who supported one another and seemed to find fulfillment simply in their relationship with one another.

7) Rob and Laura Petrie. The Dick Van Dyke Show. They were one of the first couples I saw on TV that I thought made being a Mom & Dad glamorous. They kissed a lot, they commented on one another's appearance, and sang "You, Wonderful You" and "Mountain Greenery" at parties. That more than made up for the single beds.

8) Morticia and Gomez. The Addams Family. How he loved it when Tish spoke French! I mean, really, the man just couldn't keep his hands off of her! But, just as they thought of Lurch as a member of the family, respected Grandmama's wisdom and years and encouraged their kids to think for themselves, Morticia and Gomez truly valued one another as equals. That just seemed to be how they rolled. In that way, they were always less "weird" than a lot of couples I've seen in the "real" world.

9) Carrie and Manhattan. Sex and the City. Whenever Carrie entered Central P

ark, or a boutique, or an Off Broadway theater or a hot, new club, you felt how much she loved that town. Her town. Her home. Sure, she loves Mr Big. But she loves Manhattan most of all.